Hong Kong put up a valiant fight against India before losing by just 26 runs in their Asia Cup 2018 clash. 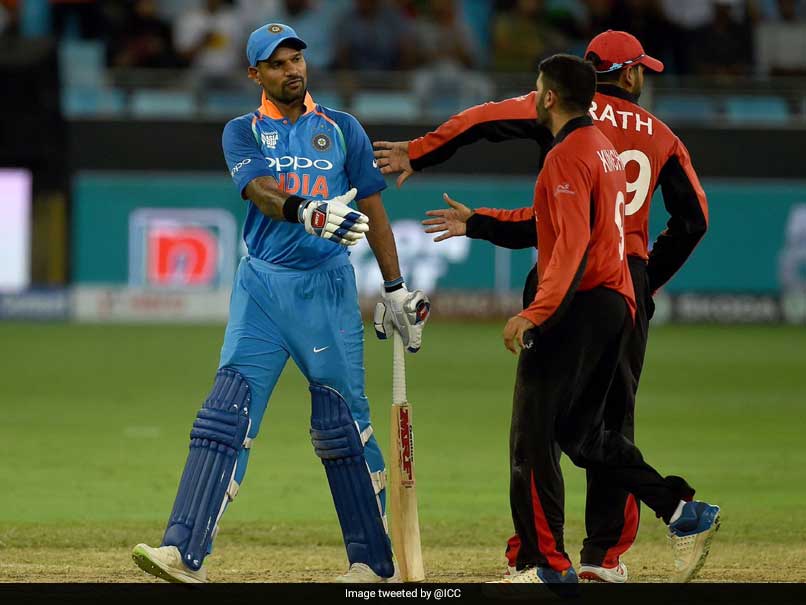 Rohit Sharma's Team India survived a scare against Hong Kong, registering a 26-run win at the Dubai International Stadium on Tuesday. Needing 286 to win, Hong Kong came agonisingly close to pulling off an upset by defeating the number two team in the ICC One-day International (ODI) rankings. To acknowledge Hong Kong's valiant effort Team India visited their lesser-known opponents' dressing room and congratulated them for punching above their weight.

After a hard-fought game, #TeamIndia visited Hong Kong's dressing room and met the promising cricketers, posed for pictures and shared their knowledge - by @28anand.

Chasing a stiff target of 286, Hong Kong openers Nizakat Khan and captain Anshuman Rath added 174 runs, the highest-ever for the associate nation in ODIs, eclipsing the stand of 170 the pair had put on for the fourth wicket versus Scotland in 2016.

The record opening partnership came just 48 hours after Hong Kong was bundled out for 116 against Pakistan.

Rath played a tired drive off Kuldeep Yadav straight to Rohit Sharma at covers and the floodgates finally opened as Hong Kong fell short by 26 runs.

Dhawan's 14th ODI hundred and Rayudu's 60 placed India in a perfect position to wage a late charge a day before the much-awaited clash against Pakistan.

However, India managed to add just 48 runs for the loss of four wickets to record a sub-300 total.

Rath won the toss for the second successive occasion and preferred to put India in to bat.

His decision didn't backfire right away as Rohit Sharma failed to clear the inner ring in the eighth over.

However, for the next 22-odd overs, it was one-way traffic in favour of Dhawan and Rayudu.

Hong Kong Asia Cup 2018 Cricket India vs Hong Kong, Match 4
Get the latest updates on Fifa Worldcup 2022 and check out  Fifa World Cup Schedule, Stats and Live Cricket Score. Like us on Facebook or follow us on Twitter for more sports updates. You can also download the NDTV Cricket app for Android or iOS.