Asia Cup 2018: Match Between India And Afghanistan Ends In A Tie

The match between India and Afghanistan ended in a tie. 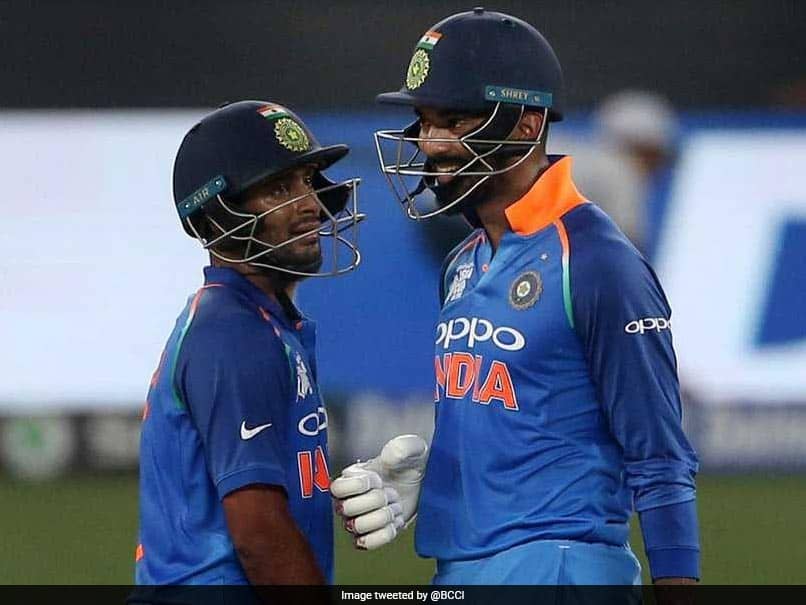 Afghanistan pulled off a sensational tie off the penultimate ball against India in the Super Four stage match of the Asia Cup in Dubai on Tuesday. Mohammad Shahzad's 124 lifted Afghanistan to 252-8 in 50 overs while India were all out in 49.5 overs with the scores level. Title holders India have already qualified for Friday's final where they meet the winners of Pakistan and Bangladesh match in Abu Dhabi on Wednesday. The result was also a huge morale booster for Afghanistan, who could have easily been in the final if not for the last over losses against Pakistan and Bangladesh earlier in Super Four matches. Opener Mohammad Shahzad had set up the game for Afghanistan with a whirlwind 124 off 116, the most significant hundred of his career, to take his team to 252 for eight.

The 253-run target was a tricky one for India. India, who have already qualified for the final on Friday, remained unbeaten in the competition though they were left disappointed with the tie. Afghanistan players, on the other hand, can go back home with their heads held high, having competed hard in the tournament.

India made as many as five changes in the eleven to give an opportunity to the reserves and rest key players including captain Rohit Sharma, Shikhar Dhawan, Jasprit Bumrah, Bhuvneshwar Kumar and Yuzvendra Chahal.

Ambati Rayudu (57 off 49) and Lokesh Rahul (60 off 66) shared 110 runs for the opening wicket and at that stage it seemed India would win it in a canter. However, the openers departed in quick succession, leaving their team at 127 for two in the 21st over.

Rahul perished while attempting a reverse sweep off Rashid Khan and ended up wasting a LBW review when he was plumb in front. Dinesh Karthik (44) came in at three and MS Dhoni (8), captaining India for the 200th time, batted at four. The review was that was squandered by Rahul would have been better used for Dhoni and Karthik, who both fell to questionable LBW decisions. The ball was clearly missing stumps in Dhoni's case.

Karthik's dismissal left India at 205 for six, leaving them to get 46 off 60 balls with Rashid still to bowl three overs. Jadeja's sensible batting took his side closer the finishing line with 13 needed off 12 balls. The pressure was also telling on India who suffered two needless run outs of Kuldeep Yadav and Siddharth Kaul. In the end, a tie was an apt result for the humdinger.

Earlier, it seemed the unconventional Shahzad was batting on a different surface as the others struggled, hammering 11 fours and as many as seven sixes. The experienced Mohammad Nabi produced a handy knock, 64 off 56 balls, towards the end ensuring a competitive total for his team.

The undisputed star of the evening was wicket-keeper batsman Shahzad, who was no short of inspiration in the middle with his role model Dhoni standing behind the stumps. While his opening partner Javed Ahmadi was even struggling to get a single, Shahzad thoroughly entertained the crowd with a barrage of big hits. He was ruthless especially against the rookie Indian pacers Khaleel Ahmed, Siddharth Kaul and debutant Chahar, who were played in place of the rested Bumrah, Bhuvneshwar and Chahal. Chahar had a forgettable debut even though he picked up a wicket.

The pacers were guilty of bowling too full or too full and Shazad made them pay for their mistakes. Most of his lofty shots were crossed-batted as he cleared his front foot to hit the huge sixes over deep mid-wicket. He even had his luck on his side as he was dropped at mid-off on way to completing a half-century. He surprisingly experienced the nervous 90s before finally reaching the three figures for the fifth time in ODIs, with a flick off Chahar towards the fine-leg boundary. It was not a full-strength Indian bowling attack but that takes nothing away from Shahzad's stellar effort. His other ODI hundreds had come against Canada, Zimbabwe, Scotland and Netherlands.

Afghanistan would have been in deep trouble if it was not for Shahzad, who was running out of partners at one stage with his team reeling at 82 for four from 65 for no loss after Indian spinners Kuldeep Yadav (2/38) and Ravindra Jadeja (3/46) came into play. The chinaman was even on a hat-trick.

Shahzad was then joined by Gulbadin Naib (15 off 46) and the two shared a 50-run stand for the fifth wicket.

After his dismissal, Nabi started plundering the bowlers, hitting four sixes and three boundaries to take help the team cross 250.

Ambati Rayudu Asia Cup 2018 India vs Afghanistan, Super Four - Match 5 Cricket
Get the latest updates on IPL 2021, IPL Points Table , IPL Schedule 2021 , live score . Like us on Facebook or follow us on Twitter for more sports updates. You can also download the NDTV Cricket app for Android or iOS.