At the close of day 2 at Lord's, Australia trail England by 228 runs with nine wickets in hand. 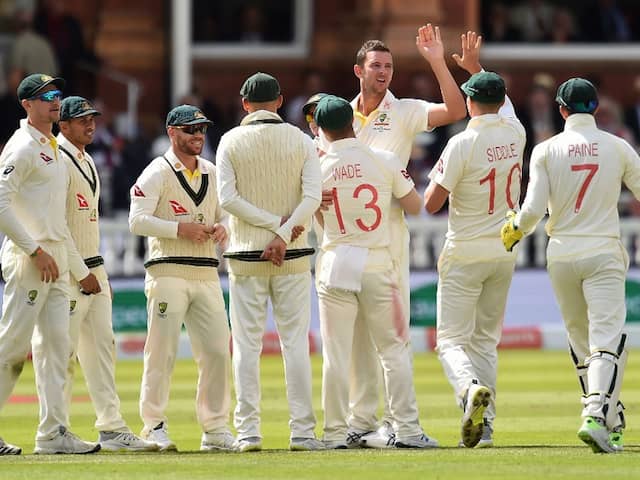 Australia's Josh Hazlewood marked his entry into this season's Ashes with three wickets as England were dismissed for 258 after the second Test at Lord's finally got underway on Thursday. World Cup-winning England fast bowler Jofra Archer then marked his Test debut with an electrifying opening spell but the only wicket Australia lost before stumps was when David Warner was bowled by Stuart Broad. At the close Ashes-holders Australia, were 30-1 -- a deficit of 228 runs. Cameron Bancroft was five not out and Usman Khawaja 18 not out.

England suffered an all-too familiar collapse as they slumped to 138-6 before a seventh-wicket stand of 72 between Jonny Bairstow and Chris Woakes repaired some of the damage.

Only opener Rory Burns (53) and wicketkeeper Bairstow, last man out for 52, passed fifty in the innings.

Hazlewood, the lone change to the Australia side that won the first Test by 251 runs at Edgbaston last week, took three wickets for 58 runs from 22 overs.

Hazlewood backed him up when, with just the ninth ball of the day, his third, he had Jason Roy caught behind by wicketkeeper Paine after the batsman fended at a rising delivery outside off stump.

Hazlewood then had England captain Joe Root lbw for 14 to a ball that nipped back.

Burns, fresh from his maiden Test century at Edgbaston, was dropped on 16 when Khawaja failed to hold a routine gully chance off Peter Siddle.

But although the sunny conditions appeared good for batting, wickets tumbled early in the second session.

Joe Denly (30), shaken up by a couple of short balls from Cummins, was caught behind off Hazlewood.

But Paine then dropped a low left-handed chance off Siddle to give Burns, now on 47, another reprieve

Burns completed an admirable 119-ball fifty including seven fours but was out when Bancroft held a brilliant diving left-handed catch at short leg off Cummins.

Woakes was out shortly after being hit on the head by a Cummins bouncer.

Bairstow completed a defiant 82-ball fifty that came after he had managed just 30 runs in his six previous Test innings before he holed out off Lyon.

Archer, replacing the injured James Anderson, England's record wicket-taker, was given the new ball alongside Broad on the ground where he had bowled the Super Over that had secured a World Cup final win over New Zealand last month.

His second ball cut sharply back up the Lord's slope and just missed Bancroft's off-stump and he beat the bat repeatedly in a thrilling six-over spell.

Thursday saw Lord's turn red in support of the Ruth Strauss Foundation -- a lung cancer charity set up to honour the late wife of Andrew Strauss, the former England captain, who died from the disease.

Josh Hazlewood The Ashes 2019 Cricket
Get the latest Cricket news, check out the India cricket schedule, Cricket live score . Like us on Facebook or follow us on Twitter for more sports updates. You can also download the NDTV Cricket app for Android or iOS.