100 Days To World Cup 2019: Everything You Need To Know About The Mega Event

The cricket World Cup will be held in England and Wales for the first time in 20 years. 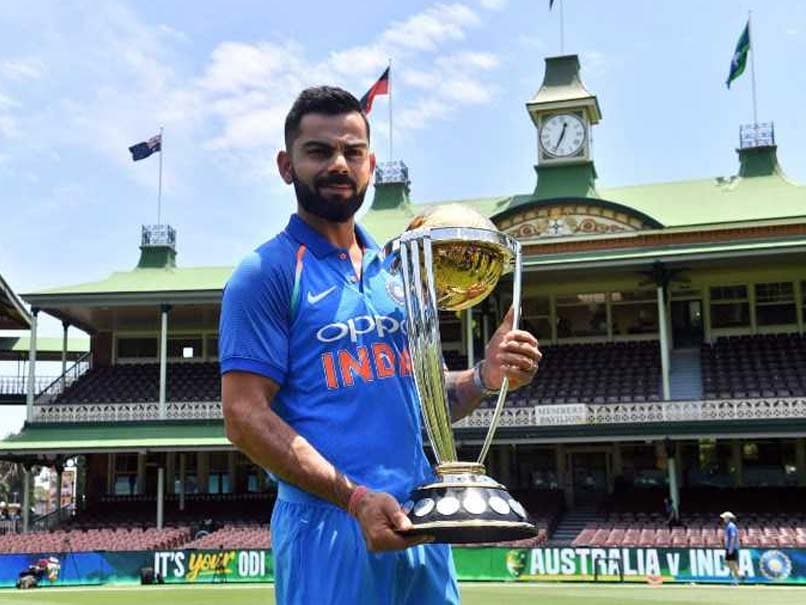 Under Virat Kohli's leadership, India will enter the World Cup as favourites alongside England.© AFP

The Cricket World Cup 2019 will be held in England and Wales from May 30 to July 14. February 19 (Tuesday) will mark the 100 days to go before the start of the quadrennial event. The cricket's biggest extravaganza will be held in England and Wales for the first time in 20 years. The most successful team in the tournament's history is Australia, who have claimed the title five times, including the most recent edition in 2015, beating their trans-Tasman rivals New Zealand in the final.

In the showpiece event, the ten participants will engage in a round-robin group stage.

The top four teams will then proceed to the semi-finals, with the winners meeting in the final at Lord's.

There will be 48 matches in total across 11 venues in England and Wales.

As the 100-day countdown is about to begin, let us take a look at all the sides playing the 50-overs a side event.

Afghanistan have made giant strides in the world of cricket since featuring in the 2015 World Cup for the first time. However, they had to endure a nail-biting qualifying competition in Zimbabwe to make the 2019 edition.

Neverthelss, they are not to be under-rated. At the 2018 Asia Cup, they beat Sri Lanka and Bangladesh and tied against eventual champions India.

Leg-spinner Rashid Khan will be the trump card for Afghanistan. The 20-year-old is a wicket-taking bowler - he became the fastest to reach 100 ODI wickets in 44 matches. Rashid can bowl in the power-play as well as in the death overs.

The defending champions and five-time winners are the most successful country in the tournament's history, beating New Zealand by seven wickets in the final on home turf in 2015. But they have struggled for form since the team was embroiled in a ball-tampering scandal that rocked the game last year.

They were hammered by England 9-1 across two series in 2018, and followed it up with series defeats over the home summer against South Africa (2-1) and India (2-1).

However, they pulled out big guns ahead of the World Cup by appointing vastly experienced Ricky Ponting, who played at five World Cups and won at three, as their assistant coach.

Steve Smith and David Warner are being seen as their saviours. They are both eligible again in late March after their one-year bans over the ball-tampering affair expire and are widely expected to slot straight back into the side. The expectations are high for the two star batsmen who between them have played 214 ODIs and scored 7,774 runs.

Perennial underachievers Bangladesh will be looking to improve on their 2015 quater-final finish after some heartening performances in the United Kingdom. They qualified for the semi-finals of the 2017 Champions Trophy from a group that also featured hosts England, Australia and New Zealand.

In 2018, Bangladesh won 13 of their 20 ODI matches, behind only England and India in terms of the number of wins. The Tigers will rely on the experience of key players like Mashrafe Mortaza, Tamim Iqbal, Shakib Al Hasan and Mushfiqur Rahim who are all expected to play their fourth 50-over World Cup.

At 35, Mashrafe is still the leader of Bangladesh's pace attack, but left-arm quick Mustafizur Rahman can make a strong impact in what will be his maiden World Cup.

Mustafizur, the only Bangladeshi to feature in ICC's 2018 ODI team of the year, with his lively pace and incisive swing can be handy in seaming English conditions. The country's board is trying to protect the 23-year-old for the World Cup by denying him permission to join the lucrative Indian Premier League in March-April.

Have featured in every World Cup since the tournament was established in 1975 but have still to win it, with the last of their three losing appearances in the final back in 1992. An embarrassing exit at the 2015 edition, culminating in a defeat by Bangladesh, saw England go out in the group stage for the third time in five World Cups. Captained by former Ireland batsman Eoin Morgan, England have risen to the top of the 50-over rankings. Home advantage, however, may not be that much help. This will be the fifth time that England have staged the World Cup, their best performance on home turf coming when they were overpowered by the West Indies in the 1979 final.

England have several proven match-winners in their side but in wicketkeeper-batsman Jos Buttler they have an outrageously gifted shotmaker capable of 'scooping' good length balls from fast bowlers over his head for boundaries. The 28-year-old has scored six ODI hundreds and boasts a superb strike rate of just under 117.

Under Virat Kohli's leadership, heavyweights India will enter the World Cup as favourites alongside England. The second-ranked one-day side in the world have been in fine form with recent series victories in Australia and New Zealand.

India had a superb 2018 with ODI wins in South Africa (5-1), and Windies (3-1) and the Asia Cup title in the UAE. England also brings back happy memories for the two-time World Cup champions who first lifted the trophy at Lord's in 1983.

If Kohli will be key to India's chances in the 10-team tournament then new spin ace Kuldeep Yadav could lead the charge in the bowling department.

The 24-year-old Yadav claimed 45 wickets in 19 ODI matches last year with his left-arm wrist spin proving to be handful for opposition batsmen. Kohli meanwhile kept the runs going, averaging an astounding 133.55 in 14 ODIs in 2018.

The Blacks Caps hope to shed their tag as the World Cup's nearly men and claim the title after making the semi-finals six times and the final once -- in 2015 when they suffered a heavy loss to Australia.

While Kane Williamson has replaced Brendon McCullum as captain, the core of the team that powered New Zealand to the 2015 decider remains, although a recent strong run of form was marred somewhat by a 4-1 series loss to India in January.

Ferguson has added some much-needed consistency to his game and the Black Caps will be looking for the 27-year-old to ramp up the aggression and give them an intimidation factor at his first World Cup.

It's certain that Pakistan will be unpredictable. At the Champions Trophy in England two years ago, they were routed by India by 124 runs in the opening match before thrashing their arch-rivals by a massive 180 runs in the final.

Under Sarfraz Ahmed, Pakistan have some exciting talent - from Mohammad Amir to Usman Shinwari to Hasan Ali. If their vulnerable batting comes good they could repeat the exploits of Imran Khan who led the team to their only World Cup in Australia in 1992.

Babar Azam, just 24, has been compared to India superstar Virat Kohli. Babar has an ODI average of over 51 and has hit eight centuries and 10 50s.

Ever since losing on a bizarre rain rule in the semi-finals of their first World Cup campaign in 1992, South Africa have seemingly been jinxed in knock-out matches. They have only won one such match, a quarter-final in 2015, but have been beaten in four semi-finals and two quarter-finals, sometimes in circumstances that have been heartbreaking for their supporters.

The Proteas will go to the 2019 tournament with modest expectations, lacking the depth of all-rounders that made them a formidable force in the late 1990s and early 2000s and hit by the retirements of star batsman AB de Villiers and fast bowler Morne Morkel. They have won 12 and lost ten ODIs since the start of 2018.

Hard-hitting left-hander David Miller is a powerful batsman capable of changing the course of a match and an outstanding fielder. He was man of the series in a recent T20 series win against Pakistan.

Breakout star could be Lungi Ngidi, a 22-year-old fast bowler with the physique of a heavyweight boxer. He has missed most of the current season with a knee injury but is back and bowling quickly in franchise cricket.

With allegations of match-fixing and corruption plaguing Sri Lankan cricket, the 1996 World Cup champions are not a threat to top international sides despite their recent Test win in South Africa. The islanders crashed out of the 2015 edition after a big loss to South Africa in the quarter-finals and have since witnessed a decline in their cricketing fortunes.

Sri Lanka hit a new low in 2017 after a visiting Zimbabwe team beat them 3-2 in a five-match ODI series and the island nation has not won a bi-lateral rubber in the last two years. Performance apart, Sri Lankan cricket has been at the centre of allegations including attempted match-fixing ahead of a Test against England last year. But their one-wicket win over South Africa in Durban this weekend will give them hope to cause a few upsets in the World Cup.

Old warhorse Lasith Malinga still remains Sri Lanka's best bet in the bowling department and key to any chance of Sri Lanka making an impact in England and Wales. The 35-year-old paceman returned as the team's best with seven wickets in their recent 3-0 loss in New Zealand. He was also captaining the side.

With 318 wickets in 213 matches since making his ODI debut in 2004, Malinga can still inspire a struggling Sri Lankan side with his experience and his ability to stifle runs in the death overs with his slinging yorkers.

Champions of the first two World Cups in 1975 and 1979, the Windies appear doomed to endure a tortuous tournament despite their recent Test series win over England on home ground. Failed to get past the quarter-finals in 2011 and 2015 and were forced to qualify for 2019.

The Windies won eight of 18 ODIs in 2018, losing a home series against Bangladesh and coming off second best in India and a return trip to Bangladesh. In 2017, they managed just three wins in 22 games.

Chris Gayle, edging closer to his 40th birthday, is the man expected to provide the fireworks before he retires but it is 22-year-old Shimron Hetmyer who could be the team's standout star.

Already attracting breathless comparisons to Brian Lara, the dashing left-hander from Guyana has already made three centuries in his 20 ODIs with a strike rate even better than the masterful Gayle. Hetmyer led West Indies to the world under-19 title in 2016.

South Africa Cricket Team Cricket World Cup 2019
Get the latest updates on ICC Women's Cricket World Cup 2022 and IPL 2022, check out the Schedule , Live Score and IPL Points Table. Like us on Facebook or follow us on Twitter for more sports updates. You can also download the NDTV Cricket app for Android or iOS.