West Indies vs India: India are on the verge of a World Cup 2019 semi-final berth, while the West Indies will seek some sort of redemption. 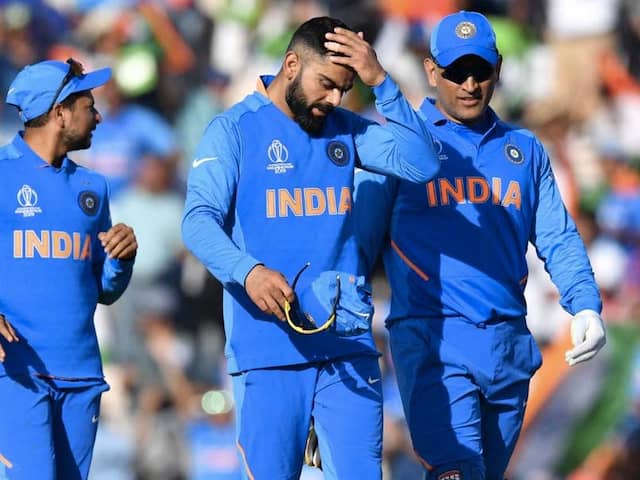 West Indies vs India: India are unbeaten in the World Cup 2019 so far.© AFP

India will look to maintain an unbeaten streak when they take on the West Indies in their next World Cup 2019 match at Old Trafford in Manchester on Thursday. The team has won four out of five matches, with one abandoned due to rain, and need two more wins in four matches to seal a semi-final berth. The West Indies, on the other hand, have won just one match and lost four, besides a washed out meeting with South Africa. Going into the next match, MS Dhoni's batting approach and position in the middle order will be the Indian team management's primary concern.

Dhoni's painfully slow approach against the Afghanistan yielded 28 off 52 balls and he was roundly criticised. Even the normally restrained Sachin Tendulkar questioned the approach.

"There was no positive intent," the usually reticent Tendulkar's observed on a TV channel.

The Indian team management knows that only too well but with four group matches left, the only option they have right now is to alter Dhoni's batting position, possibly giving a few more deliveries to Jadhav, who can be innovative in his shot selection.

Hardik Pandya is being used as a floater but the Afghanistan match showed that if he doesn't get support from the other end, there is too much pressure on him to hit every delivery for a six.

Kohli and coach Ravi Shastri till now have not been too keen to use Rishabh Pant's firepower. Pant can come in only if the team management considers the idea of Vijay Shankar being disposable.

The West Indies is a team loaded with fast bowlers so it could be a bit easier for Dhoni to rotate strike as he hasn't been comfortable against the slow bowlers.

Afghanistan exposed it thoroughly during the last game.

There have been arguments and counter-arguments about Dhoni's batting approach in the IPL compared to his style when playing 50-over cricket for India.

Dhoni, during Chennai Super Kings various chases, would invariably target one of the inexperienced Indian domestic bowlers while playing safe cricket against the bigger international names.

Against a Kagiso Rabada or a Jofra Archer, he didn't take any risks before hitting the others in successful run-chases. A strategy needs to be worked around Dhoni's skill sets here as well to place him at a position on which he can bat freely.

With his inputs and electric glove work behind the stumps an absolute necessity, this will require some tactical brainstorming by the captain and the coach.

The West Indies, on the other hand, will look to finish on a high after being knocked out despite a great start against Pakistan. Andre Russell being ruled out due to a hamstring injury has been another big blow.

West Indies Cricket Team Cricket World Cup 2019 West Indies vs India, Match 34
Get the latest Cricket news, check out the India cricket schedule, Cricket live score . Like us on Facebook or follow us on Twitter for more sports updates. You can also download the NDTV Cricket app for Android or iOS.