Jason Roy was missed badly when he was out for three games with a torn hamstring earlier in the tournament as England stumbled, suffering group-stage defeats to Sri Lanka and Australia in that period. 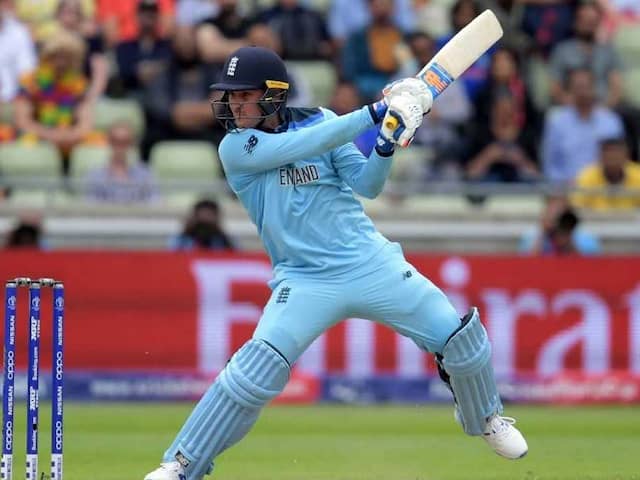 Jason Roy has been a key figure in taking England to their first World Cup final for 27 years.© AFP

Eoin Morgan has often spoken of the "fearless" cricket that has propelled England to the top of the one-day game and Jason Roy is the embodiment of that spirit at the World Cup. The opening batsman has been a key figure in taking England, who have yet to win the 50-over trophy, to their first final for 27 years. Roy was missed badly when he was out for three games with a torn hamstring earlier in the tournament as England stumbled, suffering group-stage defeats to Sri Lanka and Australia in that period.

On both occasions the pressure of a run-chase appeared to overwhelm them, with James Vince, Roy's replacement at the top of the order, making scores of 14 and nought.

It was little wonder that England, who have set such store by aggressive batting since their miserable first-round exit at the 2015 World Cup, were so desperate to get 28-year-old Surrey star Roy back into their side.

And the powerful batsman has not disappointed, hitting three consecutive fifties in victories against India, New Zealand and Australia.

The first-wicket partnership Roy has formed with Jonny Bairstow has been pivotal in England's progress to the final against New Zealand at Lord's on Sunday.

They average nearly 70 as an opening pair in one-day internationals.

To put that into context, the next-best first-wicket duo in ODI cricket, taking 30 innings together as a minimum qualification, is the celebrated West Indies pairing of Gordon Greenidge and Desmond Haynes, with an average of 52.55.

But the way Roy, a fundamentally orthodox if powerful strokeplayer, bats is about more than statistics.

There is also the galvanising effect he has, when going well, on his teammates -- and the demoralising impact he can have on the opposition.

Thursday's semi-final against Australia at Edgbaston provided a brilliant example of Roy's worth to England.

The host nation were faced with a potentially awkward chase of 224 to win against a world-class attack and the temptation might have been to treat Australia spearhead Mitchell Starc with caution at the start of the innings.

Yet Roy's response to a full leg-stump ball from Starc in just the sixth over was to hoist the left-arm quick for six over deep fine leg with a late flick of the wrists.

He was even more cavalier when Nathan Lyon came on to bowl, smashing the off-spinner's first delivery for a huge six over long-off.

He went on to make 85 off 65 balls, including nine fours and five sixes.

By the time he was controversially given out caught behind down the legside when replays suggested he had not made contact, England were well on their way to a dominant eight-wicket win.

Australia captain Aaron Finch, a county colleague of Roy's, said: "He definitely goes hard, having played with him for a few years now for Surrey.

"He's a player that when he's on he can be so damaging to an opposition and in such quick time as well."

Greenidge and Haynes, in addition to their ODI exploits that included featuring in the West Indies' 1979 World Cup final win over England, also formed one of Test cricket's best opening partnerships.

Roy has yet to play Test cricket but, with an Ashes series starting next month, some pundits believe he could be the solution to England's ongoing problems at the top of the order in the five-day game.

Roy has scored nine first-class centuries and Finch added: "He's got some really good hundreds in county cricket, probably more so in the middle-order.

"If he gets going on his day, he can be brutal and he can score so quickly in all forms of the game.  He is a very dangerous threat, no doubt."

Jason Roy World Cup 2019 Cricket New Zealand vs England, Final
Get the latest Cricket news, check out the India cricket schedule, Cricket live score . Like us on Facebook or follow us on Twitter for more sports updates. You can also download the NDTV Cricket app for Android or iOS.