Kumar Dharmasena was the umpire who gave Jason Roy out caught behind during the World Cup 2019 semi-final with Australia, a decision that incensed the batsman. 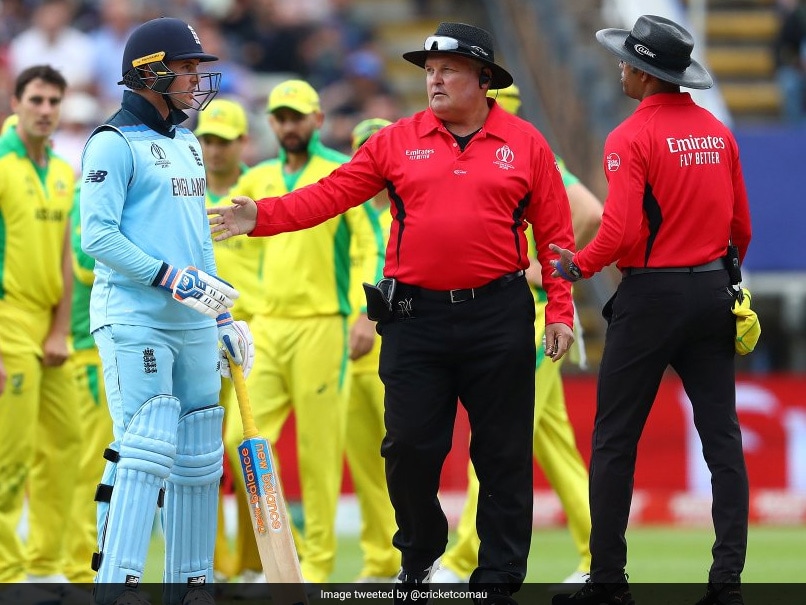 Kumar Dharmasena and Marais Erasmus have been appointed to stand in the World Cup final between England and New Zealand at Lord's on Sunday. The Sri Lankan umpire found himself involved in a controversial incident when England opener Jason Roy refused to walk after being given out during the semi-final against Australia at Edgbaston on Thursday. Jason Roy had made 85 runs to set the hosts on their way to a comprehensive eight-wicket win, when he was given out caught behind down the leg-side by Dharmasena. Roy requested a review but England had already lost one. A confused Dharmasena incorrectly signalled for a review but Australia quickly pointed out his mistake.

A furious Roy refused to leave and had to be ushered away from the crease by square-leg umpire Marais Erasmus.

TV replays suggested that Roy was miles away from the ball and fans on Twitter slammed the controversial decision.

Later in the day, Roy was fined 30 percent of his match fee for showing dissent and received two demerit points from match referee Ranjan Madugalle.

On Friday, ICC named the match officials for World Cup final and once again fans took to Twitter to express their displeasure.

So Roy is fined 30% of his match fee and Dharmasena is given the world cup final? Excellent decision making from ICC!

dharmasena makes a howler of a call against roy- gets rewarded with the final ??

@ICC Before taking any action against Jason Roy you have to take the action on kumar dharmsena the umpire. Why always players have to pay for umpires mistake? Sometimes wrong decision spoil whole life of players and there team. #WrongUmpiring

@dharmasena_k shame on you for such a poor umpiring

@dharmasena_k ICC seriously needs to upscale its benchmark for deciding the elite panel... Such negligence in World cup semifinal is unacceptable... Penalizing cricketers is easy.. Let the umpires also feel the heat.. Make them accountable

Dharmasena is in the final match. #Dharmasena #NZvsENG ??

My play of the day was Dharmasena raising his finger against Roy....Its time ICC should seriously think of penalizing umpires for mistakes which shows clear negligence by an umpire...the way he gave roy out tells everything

England and @englandcricket should protest against the nomination of Dharmasena as an on field umpire for the @cricketworldcup final on sunday.#ENGvsNZ #NZvsENG #Final

Worst Umpiring in World Cup 2019@ICC silent and instead of taking action against Kumar Dharmasena, they have fined @JasonRoy20
Shame on @ICC #CWC19 #CWC19Final

South Africa's Erasmus will be the other on-field umpire in the final, with experienced Sri Lankan official Madugalle once again the match referee.

But in a change from the Edgbaston line-up, Australia's Rod Tucker will be the third umpire instead of New Zealand's Chris Gaffaney.

Jason Roy Kumar Dharmasena World Cup 2019 Cricket New Zealand vs England, Final
Get the latest updates on India vs South Africa and check out  Schedule, Results and Live Score. Like us on Facebook or follow us on Twitter for more sports updates. You can also download the NDTV Cricket app for Android or iOS.