"MS Dhoni Coming In At No. 5 Would've Made A Difference": Sachin Tendulkar After India's World Cup Exit

MS Dhoni came out to bat at No. 7 as India lost the semi-final by 18 runs to New Zealand in Manchester. 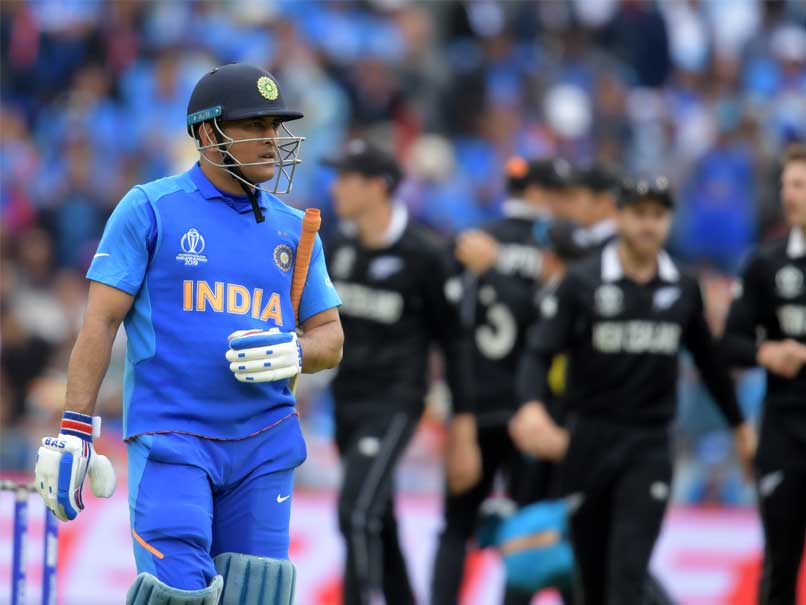 MS Dhoni anchored the innings and kept India's hope alive after their batting collapse in the chase of 240 against New Zealand in the World Cup semi-final on Wednesday. India suffered an exit after losing the rain-affected match by 18 runs at Old Trafford in Manchester. After the match, India's batting legends Sachin Tendulkar and Sourav Ganguly expressed shock at MS Dhoni's batting position in such a crucial match. "Instead of Hardik, may be Dhoni coming in at No. 5 would have made a difference. Dhoni would have for sure done something and made sure on either side of him," Sachin Tendulkar told a news channel.

"In a crunch moment like this you would think of promoting Dhoni and control the game. Towards the end he was talking to Jadeja and controlling the proceedings. Very smartly he was rotating the strike," Tendulkar added.

"Dhoni should have come ahead of Pandya. It was a tactical blunder. Dhoni should have walked ahead of Dinesh Karthik. Stage was set for Dhoni. In 2011 final also, he promoted himself up to bat at number four ahead of Yuvraj Singh and won the World Cup," Laxman said.

Ganguly said during the commentary that he was surprised with Dhoni not being sent to bat at his usual position.

The former India captain said it's not just about Dhoni's batting but also his calming influence on the young batsmen at the other end. Pant was set but lost his wicket when he attacked spinner Mitchell Santener, the dismissal prompting skipper Virat Kohli to have an animated chat with coach Ravi Shatsri.

"India needed experience at that stage. If Dhoni was there when Pant was batting, he would not have allowed Pant to play that shot against the breeze. In England, it's a big factor. He would have told him to go after pacer, when mid-off and mid-on is up, because he is good at that.

"Dhoni should have batted up. You need that composure and not just his batting. He would not have allowed wickets to fall in cluster. Dhoni was there when Jadeja batted. Communication is strength. You can't have Dhoni at number seven," Ganguly told official broadcaster Star Sports.

"As a finisher, he still has tremendous respect. He can still clear the field and that's why he left it for last. It's not that he can't hit sixes but he thinks that's the way to win ODI matches," he added.

In the rain-hit semi-final played over two days, New Zealand scored 239/8 in 50 overs after opting to bat. Kane Williamson (67) and Ross Taylor (74) formed the bedrock of their innings.

In reply, India lost four top-order batsmen for just 24 runs inside 10 overs before Ravindra Jadeja (77) and Dhoni (50) shared a 116-run seventh-wicket stand to raise hopes for an unlikely victory. However, it wasn't enough in the end as India fell short of 18 runs.

The talking point was Dinesh Karthik coming in to bat ahead of Dhoni at No. 5. Karthik fell cheaply but still there were no signs of India's 2011 World Cup winning captain as all-rounder Hardik Pandya walked in. Dhoni eventually came out to bat at No. 7.

Sachin Tendulkar Sourav Ganguly World Cup 2019 Cricket India vs New Zealand, 1st Semi Final
Get the latest updates on SA vs IND 2021-22, check out the Schedule and Live Score . Like us on Facebook or follow us on Twitter for more sports updates. You can also download the NDTV Cricket app for Android or iOS.