Jason Behrendorff took a career-best 3/63 during Australia's 5-0 victory over Pakistan in the UAE recently. 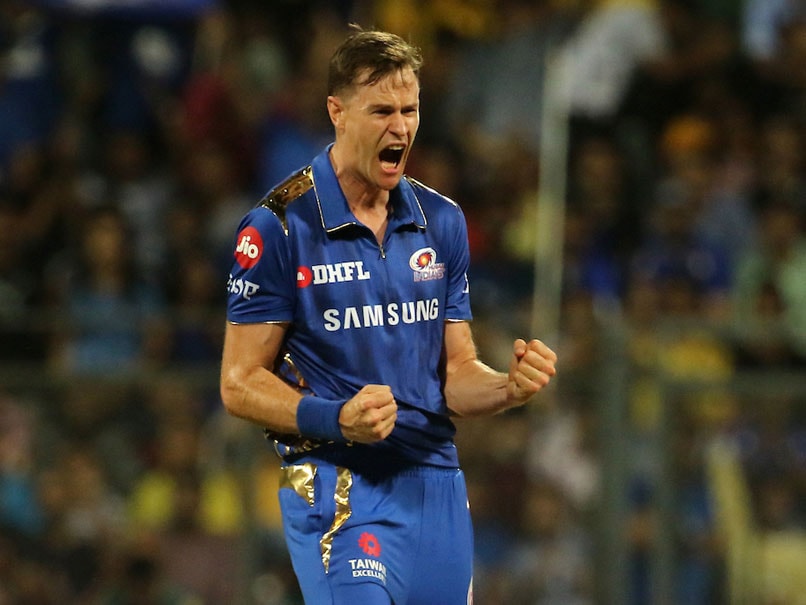 Australia fast bowler Jason Behrendorff made his Indian Premier League (IPL) debut on Wednesday for the Mumbai Indians (MI). He made a memorable debut for the three-time champions as he dismissed Chennai Super Kings' (CSK) Ambati Rayudu and Suresh Raina. Opening the bowling, he dismissed Rayudu for nought in the first over. He then removed the dangerous Raina for 16. Behrendorff picked 2/22 in 4 overs. He is hopeful of making it to Australia's World Cup-bound squad through an impressive performance in the IPL. The 28-year-old Behrendorff made his One-day International (ODI) debut for Australia against India in January.

"My spot (in the World Cup squad) is not certainly cemented down, that's for sure. Any performance here (in the IPL) can really help me out. My main strength is swinging the new ball up front and taking some wickets. It was good that I was able to do that and keep that in front of selectors' minds that I'm still bowling and bowling well," Behrendorff said.

Australia will start their World Cup 2019 campaign against Afghanistan on June 1 at the Bristol County Ground.

Having a competition with fellow left-arm Mitchell Starc for a place in the XI, Behrendorff knows his place in the squad is far from certain.

"It's not foreign to have two left-armers in the team. Australia have not done that a lot in the past, but I don't see why we can't do that. Mitch bowls exceptionally well at the death but can also bowl through the middle and up front, so it might be a case of if we're both picked in the same team having slightly different roles," he said.

"I'll probably look to bowl up front and Mitch might bowl more through the middle and at the end. But yes, if we're both on the same side, it'll be quite exciting," Behrendorff said.

Earlier, the 28-year-old took a career-best 3/63 during Australia's 5-0 victory over Pakistan in the UAE. Behrendorff, who made his ODI debut against India this year, has seven wickets under his belt from six matches.

Mumbai will tour to play against Sunrisers Hyderabad on April 6 at the Rajiv Gandhi International Stadium in Hyderabad.

Australia Cricket Team World Cup 2019 Cricket
Get the latest updates on IPL 2021, check out the IPL 2021 Schedule and Indian Premier League Live Score . Like us on Facebook or follow us on Twitter for more sports updates. You can also download the NDTV Cricket app for Android or iOS.