Australia's resurgence could not have been more perfectly timed as they defend their World Cup title in England in two months. 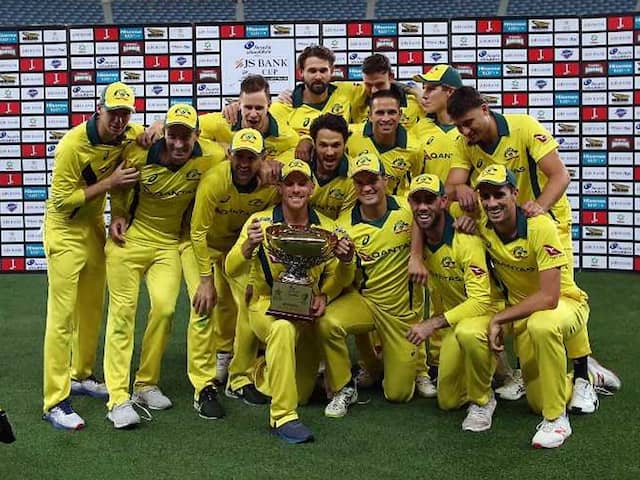 World champions Australia completed a 5-0 whitewash over Pakistan with a clinical 20-run win in the fifth and final one-day international despite a brilliant hundred from Haris Sohail in Dubai on Sunday. Sohail scored a 129-ball 130 for his second one-day international hundred but failed to take Pakistan past Australia's imposing 327-7, finishing at 307-7 in 50 overs. Australia's total was built around Usman Khawaja's 98 and a fiery 33-ball 70 by Glenn Maxwell coupled with Shaun Marsh's 61 and skipper Aaron Finch's 53 in a dominating batting show.

Australia's resurgence -- after winning just three of their 18 matches between January 2018 to the first two matches in India earlier this month -- could not have been more perfectly timed as they defend their World Cup title in England in two months.

Sohail, who hit 11 boundaries and three sixes, had set up the chase during a second wicket stand of 108 with Shan Masood (50 off 54 balls) and another 102 with Umar Akmal (44-ball 43) before Australia hit back with two wickets in the space of one run.

Umar holed out to off-spinner Nathan Lyon and a run later Sohail's innings was ended by Kane Richardson.

Stand-in skipper Imad Wasim, deputising for injured Shoaib Malik (captain for the series), hit 50 not out with six boundaries and a six but it proved in vain.

Pakistan had lost Abid Ali -- who made a debut hundred in the last game -- for nought in the first over.

Skipper Finch, declared man of the series for his two hundreds and two fifties, showed happiness at return of his and team's form.

"The way everyone contributed throughout the series was fantastic," said Finch.

"The difference in 15, 20 runs tonight was the fielding. Everyone has played a really good role.

"So the selectors have a hard job to select that World Cup squad. My own process didn't change a lot, I've just changed a couple of things technically over the last couple of weeks."

Finch was happy at beating India and Pakistan on the Asian tour.

"The next couple of weeks will be important for guys to refocus and recharge their batteries. We'll go to the World Cup with a lot of confidence now, even after a lot of people wrote us off."

Wasim said he hopes Pakistan will recover before the World Cup 2019.

"We have to keep our chins up as we have a series coming up against England and the World Cup. We'll sit down and see what we have to do," said Wasim.

Khawaja and Maxwell made merry against Pakistan's bowling attack.

It was Maxwell's ten fours and three sixes that helped Australia to 107 runs in the last ten overs. He was finally bowled by paceman Junaid Khan who finished with three wickets for 63.

Khawaja, who hit ten boundaries in his 111-ball innings, set the platform with a solid 134-run opening stand with Finch for the pair's second hundred run stand in the series.

Finch was finally bowled by pacer Usman Shinwari, finishing with 451 runs in the series, only 27 short of George Bailey's record in a bilateral series he made against India in 2013.

Khawaja, who made his first two ODI career hundreds in India earlier this month, was all set for his third but fell to a miscued drive off Shinwari, who finished with 4-49.

Khawaja added 80 for the second wicket with Marsh who hit five fours and a six in his 68-ball knock.

Australia won the first two matches in Sharjah by identical margins of eight wickets before winning the third in Abu Dhabi by 80 runs and fourth in Dubai by six runs.

Haris Sohail Pakistan vs Australia, 5th ODI Cricket
Get the latest Cricket news, check out the India cricket schedule, Cricket live score . Like us on Facebook or follow us on Twitter for more sports updates. You can also download the NDTV Cricket app for Android or iOS.