Mohammad Amir was warned twice for running on the danger area of the pitch. If he gets a third warning, he will not be allowed to bowl any more. 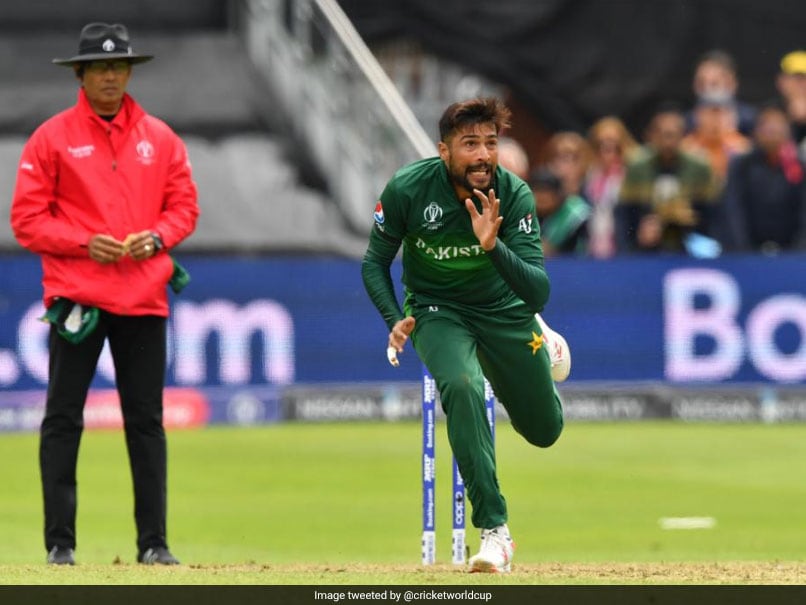 Mohammad Amir, making his first appearance in a 50-over World Cup, made a fiery start against India after Pakistan opted to bowl in the crucial World Cup 2019 league match at Old Trafford, Manchester, on Sunday. However, the left-handed fast bowler got official warnings twice for running onto the danger area after delivering the ball. Umpire Bruce Oxenford walked down to Mohammad Amir, once in the third over and then in fifth and warned him on his position while bowling to Rohit Sharma and KL Rahul respectively.

On the fourth ball of the third over, umpire Oxenford gave Amir an official warning, without a formal intimation before. Captain Sarfaraz Ahmed quickly walked up to Oxenford and had a word.

Later on the fifth ball of the fifth over, Amir again followed through on the danger zone while bowling to Rahul.

If Amir gets another warning, he will be off the attack. Pakistan will like to avoid that as Amir has been impressive so far in the match.

In his first spell, Amir conceded just eight runs in four overs, including a maiden opening over.

After the warnings, Amir went on to inspect the danger area spot along with all-rounder Mohammad Hafeez.

According to the ICC rule-book, bowlers must not run on to the protected area near the stumps after delivering the ball so as not to unfairly scuff up the surface and make batting more difficult when the bowling is from the other end.

Earlier, Pakistan captain Sarfaraz Ahmed won the toss and opted to bowl against India amid rain forecasts in a much-anticipated match.

Shankar is expected to bat at No. 4 for India as Rahul opened the innings with Rohit Sharma.

"We will bowl first. It has been raining in Old Trafford from the last three days so conditions are good for bowling. I think it is a good option to play two spinners against India. We have quality spinners and we have backed them today," Sarfaraz said at the toss.

Old Trafford, Manchester World Cup 2019 Cricket India vs Pakistan, Match 22
Get the latest updates on ICC T20 Worldcup 2022 and CWG 2022 check out the Schedule, Live Score and Medals Tally. Like us on Facebook or follow us on Twitter for more sports updates. You can also download the NDTV Cricket app for Android or iOS.