Manchester Weather Update: Rohit Sharma scored a century and Virat Kohli was unbeaten on 71 when the rain stopped play at Old Trafford. 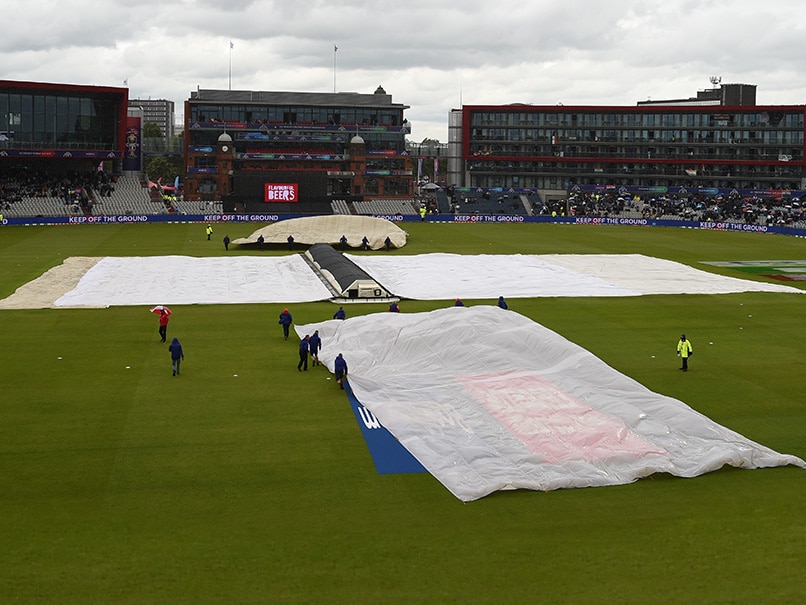 Manchester Weather: Pakistan won the toss and opted to bowl in Manchester.© AFP

The rain returned to annoy cricketers and fans as Pakistan begun their chase of 337 against India in the World Cup 2019 at the Old Trafford in Manchester on Sunday. As players from both the teams came out in the middle, some passing showers sent them back for a while. However, they returned to resume the play soon after sky turned bright and sunny. Earlier the India vs Pakistan World Cup 2019 clash was interrupted by the rain after 46.4 overs of the Indian innings. The play was resumed after a break of one hour. India captain Virat Kohli was at the crease, unbeaten on 71 runs, with all-rounder Vijay Shankar (3) when rain intervened a session well dominated by the Indian team.

On Saturday, there was slight relief as rain had stopped pouring in the afternoon which has resulted into dampened areas on the field.

The Manchester weather forecast early on Sunday showed continuous rain which took a halt at around 07:00 AM (IST) as sun shone bright over Old Trafford. Considering the importance of the India vs Pakistan World Cup 2019 match, the toss might take place early.

This is better , sky condition currently in #Manchester #INDvsPAK pic.twitter.com/x3fUffvCD2

Weather in Manchester is clear and throughout the India vs Pakistan match maximum chances of rain are 22%. pic.twitter.com/MiZFusu5Yl

The Manchester sky might clear down at around 07:00 PM (IST) in the evening after continuous pouring. If the outfield permits and the super soppers can dry up the wet patches, we might see a shortened match. But before that, the start of the match and toss could be delayed due to wet field.

The World Cup 2019 has already seen some matches abandoned due to rain for which the International Cricket Council (ICC) was criticised by the fans from all over the world.

Despite rain playing spoilsport, the International Cricket Council (ICC) said that factoring in reserve days would make the tournament a "logistical nightmare".

"Factoring in a reserve day for every match at the ICC World Cup would significantly increase the length of the tournament and practically would be extremely complex to deliver," ICC Chief Executive David Richardson said in a statement.

Richardson further said, "This is extremely unseasonal weather. In the last couple of days, we have experienced more than twice the average monthly rainfall for June which is usually the third driest month in the UK. In 2018, there was just 2 mm of rain in June but the last 24 hours alone has seen around 100 mm rainfall in the south-east of England.

Pakistan Cricket Team World Cup 2019 Cricket
Get the latest updates on ICC T20 Worldcup 2022 and CWG 2022 check out the Schedule, Live Score and Medals Tally. Like us on Facebook or follow us on Twitter for more sports updates. You can also download the NDTV Cricket app for Android or iOS.