The Indian team arrived in Trinidad ahead of the three-match ODI series against the West Indies. 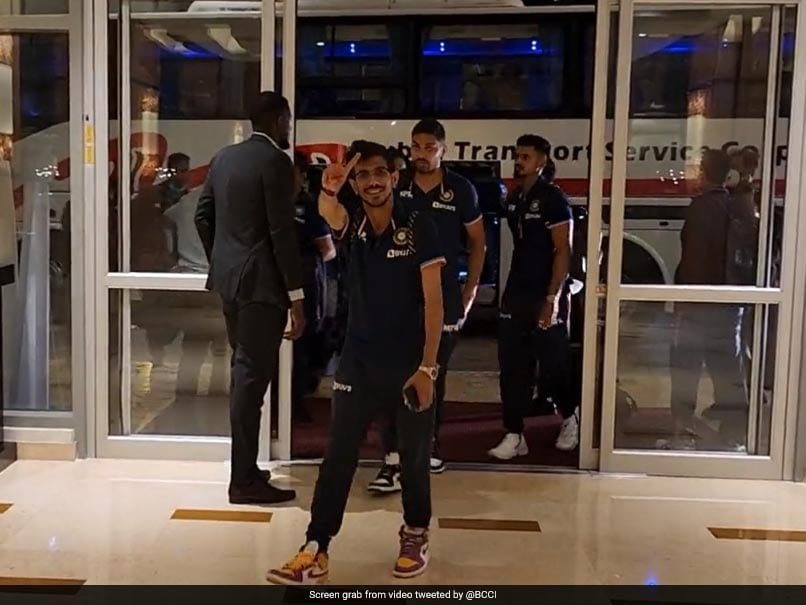 Yuzvendra Chahal strikes a pose as he walks into the team hotel in Trinidad.© Twitter

Team India arrived in Trinidad on Wednesday ahead of their white-ball series against West Indies, which is scheduled to start from Friday. Shikhar Dhawan, Yuzvendra Chahal, Shreyas Iyer, Avesh Khan, Ishan Kishan and Mohammed Siraj were some of the players seen at the hotel along with the rest of the squad. "Trinidad - WE ARE HERE!" tweeted BCCI. India and West Indies will square off in three one-day internationals (ODIs) from July 22 to July 27. The five-match T20I series will start on July 29 and will conclude on August 7.

India has announced its squad for both ODI and T20I series. Senior players like Virat Kohli and Jasprit Bumrah are missing from both squads, while captain Rohit Sharma is only playing the T20Is.

On the other hand, West Indies have also announced its squad for the ODI series. Veteran all-rounder Jason Holder has been recalled into the squad for the series.

The Indian team last toured West Indies in 2019. They both had two Tests, three ODIs and three T20Is. India won the Test series 2-0 and also won ODI and T20I series by 2-0 and 3-0 respectively.

Comments
Topics mentioned in this article
West Indies vs India, 2022

West Indies Cricket Team Cricket
Get the latest updates on India vs Australia and check out  Schedule, Results and Live Score. Like us on Facebook or follow us on Twitter for more sports updates. You can also download the NDTV Cricket app for Android or iOS.