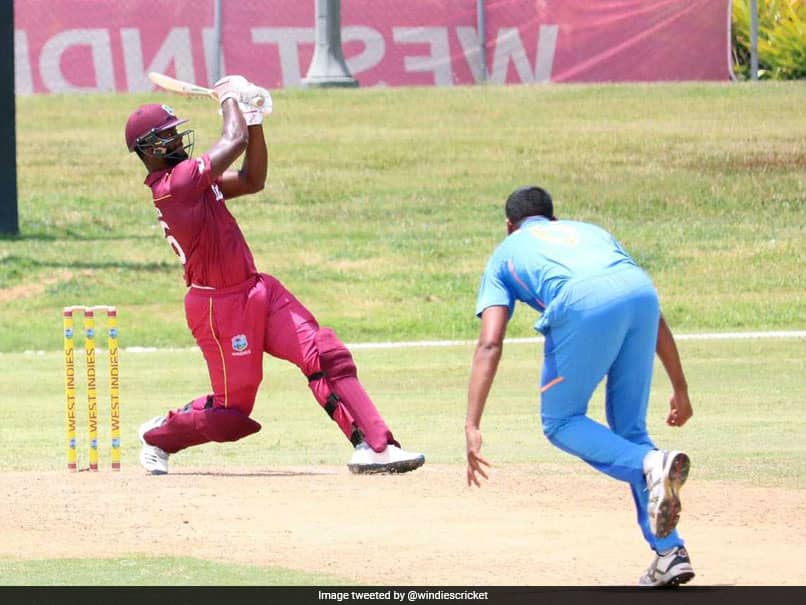 West Indies A registered their first win against India A in the ongoing five-match series.© Twitter

West Indies A registered their first win of the five-match unofficial ODI series on Friday (local time) as they defeat India A by five runs. Chasing 299, Indian team got off to a steady start as openers Anmolpreet Singh and Ruturaj Gaikwad provided a 32-run stand, but their resistance was cut short by Sherfane Rutherford's brilliance in the field as he dismissed Singh (11). The Indian team kept on losing wickets in the middle and they were not able to stitch a solid partnership as the Indian side got reduced to 127/5 in the 26th over.

Axar Patel held the fort for the India side as he mixed caution and aggression and he went on to stay unbeaten at 81.

Krunal Pandya, Washington Sundar then took the honours upon themselves and they tried to rescue India. Both the players went on to play knocks of 45, but as soon as they got sent to the pavilion, India's hopes of a win were dashed and the team lost the match by five runs.

Earlier, India had won the toss and they opted to bowl. Roston Chase's knock of 84 runs enabled West Indies to post the score of 298/9 in the allotted fifty overs.

Devon Thomas, Chase, and Jonathon Carter went on to register scores of fifty-plus to consolidate the Carribean's side batting performance.

Khaleel Ahmed scalped four wickets for India, but in the end, Romario Shephard scored 21 runs off just 8 balls to propel West Indies over the 295-run mark.

Both teams will now face each other in the fifth and final ODI on July 21 with India holding an unassailable 3-1 lead in the series.

Axar Patel Roston Chase Cricket West Indies vs India 2019
Get the latest updates on IPL 2021, IPL Points Table , IPL Schedule 2021 , live score . Like us on Facebook or follow us on Twitter for more sports updates. You can also download the NDTV Cricket app for Android or iOS.