"Is That Really You": Social Media In Disbelief Over Shikhar Dhawan's Flute Video. Watch

Shikhar Dhawan posted a video on his Instagram account of him playing a flute, triggering a wave of reactions from shell-shocked fans. 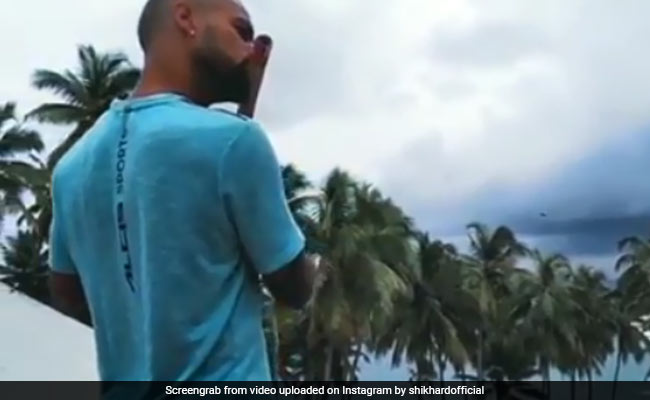 Shikhar Dhawan was not part of the Indian team that demolished the West Indies in the two-match Test series that concluded on Sunday. But the Indian cricketer seems to be making most of his time away from the game, honing his flute-playing skills. The India opener posted a video on his Instagram account of him playing a flute, triggering a wave of reactions from shell-shocked fans. While many were full of praise for Shikhar Dhawan and his talent on show, a few others questioned the authenticity of it.

Here is the video that everyone is talking about:

A fresh start.. Trees, the wind, the ocean & some music = bliss.

Users on Instagram came in their numbers to have their say.

Some even went to the extent of calling him Krishna.

However, not everyone believed in Shikhar Dhawan's flute-playing skills.

"Is that really you?," wrote boseonthebass.

bighdey_nawab simply refused to believe that it was Shikhar Dhawan playing the flute: "You are not playing it , I am damn sure."

Shikhar Dhawan had a torrid time with the bat in the West Indies. He was part of the Indian team that routed the hosts in the T20I series as well as the ODI series. However, the left-hander failed to make an impression.

He fared a little better in the ODI series but was still far from his best. The left-hander scored 38 runs in two innings at an average of 19 and a strike-rate of 19. He was not part of the Indian Test team that rolled over the West Indies without even breaking a sweat.

Shikhar Dhawan West Indies vs India 2019 Cricket
Get the latest updates on IPL Auction 2023 and check out  IPL 2023 and Live Cricket Score. Like us on Facebook or follow us on Twitter for more sports updates. You can also download the NDTV Cricket app for Android or iOS.