Rishabh Pant will be the lone wicketkeeper-batsman in the limited overs leg of the upcoming West Indies tour. 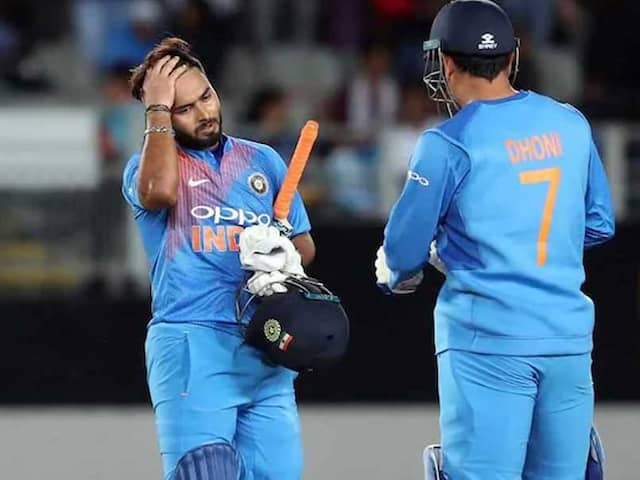 Rishabh Pant has been picked in all the three formats for the upcoming tour of West Indies.© AFP

MS Dhoni ruled himself out of the upcoming tour of West Indies and that paved the way for Rishabh Pant to be included in the India squad as the lone wicketkeeper-batsman. The selection committee, led by MSK Prasad on Sunday announced the squads for the Windies tour with Pant being picked for all the three formats for India. During the announcement, chief selector, MSK Prasad said that they (selectors) are looking to groom Rishabh Pant for the future while keeping an eye on his workload. The chief selector also stressed on the fact that Pant will be playing in all three formats.

The selection committee has also granted MS Dhoni his request for a break from the West Indies tour. Dhoni had made himself unavailable for the tour as he decided to take a two-month break and serve his army regiment. Dhoni is an Honorary Lieutenant Colonel in the Parachute Regiment of the Territorial Army.

"He (Dhoni) is unavailable for this series. We had certain roadmaps till World Cup and we subsequently have some plans and we want to groom Pant and that is the plan right now. Pant hasn't done anything wrong for his non-inclusion in the playing XI," said MSK Prasad while announcing the squad.

"Rishabh Pant will be playing all the three formats so we will have to look about his workload management. Saha and KS Bharat will come into picture at some point," MSK Prasad added.

The chief selector also highlighted that Andhra's wicketkeeper-batsman KS Bharat was very close to being picked in the squad but since Wriddhiman Saha was fit, he got the nod.

"In the longer format, KS Bharat was very, very close to get selected. We have an unwritten norm when a senior cricketer is injured, he should get a comeback opportunity. That's what we have given to Saha," said Prasad.

The BCCI chief selector further said that the squads for the West Indies tour have been announced keeping in consideration the performances of the players who are playing for India 'A' in the Caribbean Islands.

Shreyas Iyer, Manish Pandey, Rahul Chahar, Navdeep Saini and Krunal Pandya are among the ones who have been playing for India 'A' against West Indies 'A'.

"We have taken India 'A' performances into consideration," said Prasad. All-rounder Hardik Pandya, who suffered from a groin injury during the World Cup, has been rested for the entire tour.

Pant was not included in the initial World Cup squad and was then called in as a replacement for Shikhar Dhawan, who got injured during India's league stage match against Australia. Prasad said that the 21-year-old was drafted into the World Cup squad on the insistence of the team management who felt the need of a left-handed batsman at the top of the order.

"I don't do press conference in between any series and that has led to speculations. When Dhawan got injured, we already had a third opener in KL (Rahul). We didn't have a left-hander at top so the team management had requested for a left-hander and we had no option other than Pant. It confused many why middle-order came in for opener," said Prasad.

ndia's tour of West Indies will take place from August 3 to September 3 and will be held in the Caribbean islands and the US.

The tour kicks off with two T20Is at the Broward County Stadium in Florida, US -- played on August 3 and 4. Both teams will then travel to Guyana to play the final T20I on August 6 at the Guyana National Stadium.

After that, both the teams play the first ODI of the three-match series at the same ground in Guyana on August 8, followed by the remaining two 50-over matches to be played at the Queen's Park Oval in Trinidad on August 11 and 14.

The two Tests, which are part of the ICC Test Championship, will be played at the Vivian Richards Cricket Ground in Antigua (August 22-26) and at Sabina Park in Jamaica (August 30-September 3).