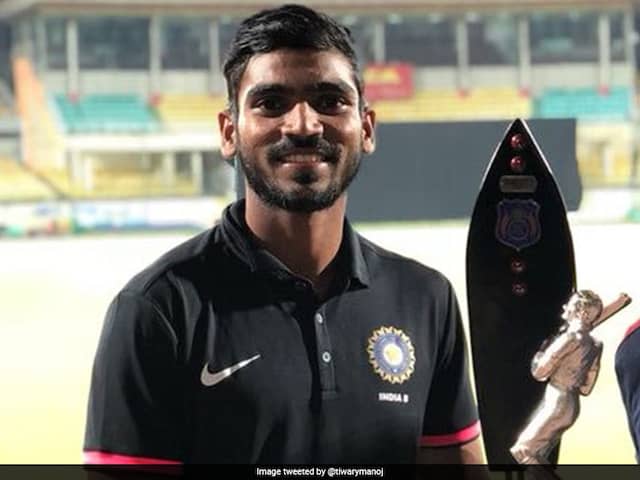 KS Bharat had notched up a century recently for India A.© Twitter

Chief selector MSK Prasad on Sunday named the squads for the West Indies tour, with many youngsters making a cut in the team, on the back of their prolific India A performances. But 25-year-old KS Bharat, who was in the fray on earning a Test call-up, missed out on the flight. However, chief selector MSK Prasad, impressed with KS Bharat's performances said he might be considered for some other series later in the year. Prasad also clarified Rishabh Pant, Wriddhiman Saha and KS Bharat are three wicket-keeper batsmen India will be looking at in Test cricket for sometime.

"We have taken the India A performances into consideration, the performances of Manish Pandey, Shreyas Iyer has been phenomenal and so is Navdeep Saini and also in the longer format it was KS Bharat, was very very close to getting selected," Prasad told reporters.

"We have an unwritten norm, that somebody, the established cricketer, when he gets injured, when he comes back, I think an opportunity should be given to him, so that's how we have given an opportunity to Wriddhiman Saha

"But I can tell that with the stellar performances that KS Bharat is doing, in India A, last three series he has got three centuries and he picked up about 50 dismissals, which is a fantastic thing and he was very, very close and these are Rishabh, KS and Wrdiddhiman Saha are three guys we will be looking at Test cricket for sometime," he added.

Bharat, has been in phenomenal form, scoring centuries for India A against Australia A, England Lions and Sri Lanka A, with the high score of 142 runs. He has also been effective with stumpings and catches from behind the stumps.

In the first-class cricket, he holds an average of 38.75 and has a triple century to his name. He has also scored eight centuries and twenty half-centuries in this format.

Wriddhiman Saha Cricket
Get the latest updates on IPL 2020, check out the IPL Schedule for 2020 and Indian Premier League (IPL) Cricket live score . Like us on Facebook or follow us on Twitter for more sports updates. You can also download the NDTV Cricket app for Android or iOS.