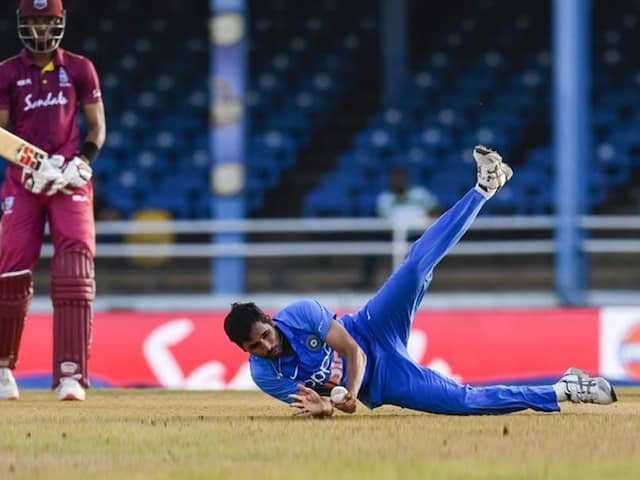 India coasted to a 59-run (DLS) victory over the West Indies in a rain-hit second One-Day International (ODI) at the Queen's Park Oval in Port of Spain, Trinidad on Sunday. Captain Virat Kohli starred with the bat, ending a run of 11 innings without a century. With the ball in hand, Bhuvneshwar Kumar was the man of the hour for India, registering figures of four for 31. However, the highlight of Bhuvneshwar's performance came in the 35th over when he took an absolutely sensational return catch to send Roston Chase packing.

Roston Chase tried to play Bhuvneshwar's good length delivery to the leg side but ended up getting a leading edge. The Indian pacer dived full-length to his left and snapped up the ball with his left hand, much to the joy of captain Virat Kohli and his other teammates.

Virat Kohli went a long way towards justifying his decision to bat first with a typically assertive innings of 120 off 125 deliveries, with 14 fours and four sixes adorning his 42nd ODI hundred as India totalled 279 for seven.

Set a revised target of 270 off 46 overs when rain interrupted play during their chase, West Indies were on course at 179 for four in the 35th over but then crashed to 210 all out with four overs to spare as seamer Bhuvneshwar Kumar triggered the slide.

Nicholas Pooran, West Indies' outstanding batsman at the World Cup, stroked his way to 42 but it was his dismissal off Bhuvneshwar Kumar which triggered the decisive slide as four wickets fell for just three runs in the space of three overs.

Virat Kohli Roston Chase West Indies vs India 2019 West Indies vs India, 2nd ODI Cricket
Get the latest updates on IPL 2020, check out the IPL Schedule for 2020 and Indian Premier League (IPL) Cricket live score . Like us on Facebook or follow us on Twitter for more sports updates. You can also download the NDTV Cricket app for Android or iOS.