Australia vs England: During the Ashes trophy celebration, Pat Cummins asked his teammates to delay spraying champagne bottles so that Usman Khawaja could join them. 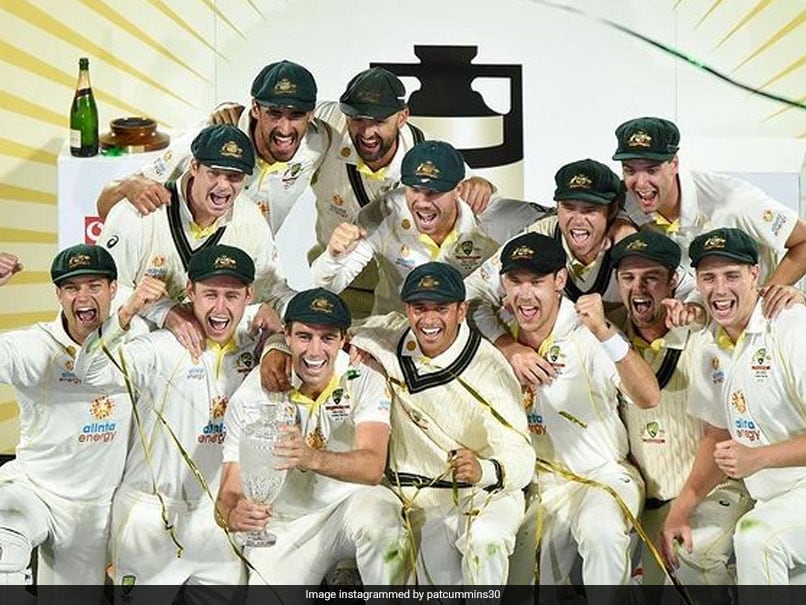 Pat Cummins made a brilliant start to his Test captaincy career on Sunday as he led Australia to a 4-0 victory over England in the 2021-22 Ashes series. Succeeding Tim Paine in that role, Cummins not only helped his side retain the urn but also put in a dominating display. After the fourth Ashes Test ended in a thrilling draw, the hosts hammered Joe Root's side in the fifth and final match, winning by 146 runs in Hobart. Following the win, Cummins won the hearts of fans with a brilliant gesture for batter Usman Khawaja during the trophy celebration.

After being handed the trophy, the Aussie players were about to open champagne bottles in to spray it on each other. But Cummins realised that Khawaja would not be able to be a part of all that.

So, he signalled his teammates to keep the bottles away and asked Khawaja to join the trophy celebrations.

Pat Cummins realizing that Khawaja had to stand away because of the alcohol so he tells his team to put it away and calls Khawaja back immediately. A very small but a very beautiful gesturepic.twitter.com/KlRWLprbWM

Khawaja is a practicing Muslim and alcohol is prohibited.

Khawaja was included in the playing XI in the fourth Test match as Travis Head's replacement.

The 35-year-old became only the third player to hit a century in both innings of a Test match at the Sydney Cricket Ground, smashing 137 and 101 (not out) against England.

He also became the sixth Australian batter to score twin tons in a single Ashes Test.

Despite his power-packed knocks, England managed to hold Australia and draw the fourth Test match.

Khawaja kept his place in the fifth Test match but failed to replicate his form from the previous game.

Bellerive Oval, Hobart Cricket
Get the latest updates on ICC Women's Cricket World Cup 2022 and IPL 2022, check out the Schedule , Live Score and IPL Points Table. Like us on Facebook or follow us on Twitter for more sports updates. You can also download the NDTV Cricket app for Android or iOS.