World No. 11 Venus, beaten in this year's Australian Open final, was knocked out in the 2016 semi-finals and is chasing a first major title since winning Wimbledon in 2008. 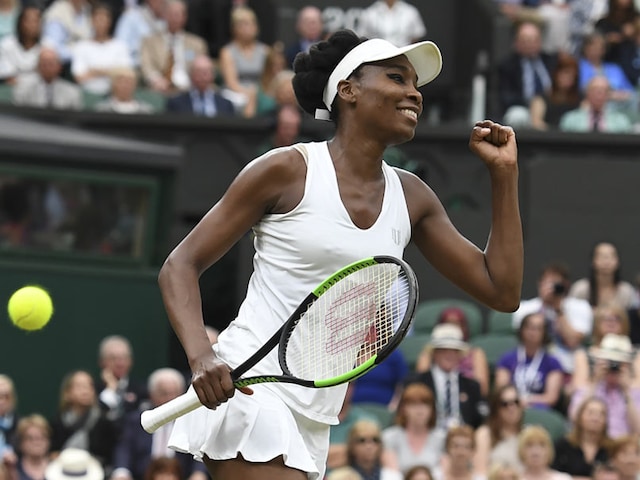 Johanna Konta became the first British woman to reach the Wimbledon semi-finals for 39 years on Tuesday, while five-time champion Venus Williams also made history as the oldest semi-finalist since 1994. Konta thrilled the patriotic Centre Court crowd with a pulsating 6-7 (2/7), 7-6 (7/5), 6-4 victory that ended second seed Simona Halep's bid to become the new world number one. In a potentially classic semi-final on Thursday, Konta faces American star Venus.

Williams had her own landmark moment on Centre Court with a 6-3, 7-5 win over French Open champion Jelena Ostapenko that made her the oldest semi-finalist at the All England Club since Martina Navratilova 23 years ago.

Halep's defeat means Czech Karolina Pliskova, who lost in the Wimbledon second round, will replace Angelique Kerber on top of the WTA rankings.

Konta, 26, is the first Briton since Virginia Wade in 1978 to make the women's semi-finals.

Wade, the last British woman to win Wimbledon in 1977, was watching from the Royal Box as Konta reached the second Grand Slam semi-final of her career, the other ending in a 2016 Australian Open defeat against Kerber.

World number 11 Williams, beaten in this year's Australian Open final, was knocked out in the 2016 semi-finals and is chasing a first major title since winning Wimbledon in 2008.

Williams' victory equalled her sister Serena's total of 86 main draw match victories at Wimbledon, the most among any active player.

She will climb back into the top 10 thanks to her Wimbledon run, but breaking Serena's record to become the tournament's oldest champion in the Open era is her sole focus.

"I love this game. That's why I put in the effort and the time. It's a beautiful game. It's been so good to me," Venus said.

"The competition keeps you growing. You have to get better if you want to stay relevent.

"I love the challenge. It's not always easy dealing with the pressure. It's only you that can have the answer."

Twenty years after making her Wimbledon debut, Venus was playing in her 100th singles match at the All England Club, while Ostapenko was in only her eighth.

That gulf in experience was immediately apparent when Venus broke in the second game and cruised through the first set in serene fashion.

Having stunned the tennis world by becoming the first unseeded player to win the French Open last month, Ostapenko was riding an 11-match winning streak at the majors.

But Ostapenko, 20, was the youngest player left in the tournament and Venus has scythed through the draw by dispatching a series of opponents almost half her age, many of whom idolised the seven-time Grand Slam champion when they were growing up.

Williams was just too canny for the fresh-faced Ostapenko, manoeuvering her out of position time and again before delivering the kill shot.

After breaking in the third game of the second set, Williams moved into a 3-1 lead, then endured her only wobble as Ostapenko broke back.

Williams was unfazed and shattered Ostapenko's spirit with another break before serving out a commanding win.

Meanwhile, Garbine Muguruza powered into her second Wimbledon semi-final in the last three years with an emphatic 6-3, 6-4 win over Russian seventh seed Kuznetsova.

Since winning her maiden Grand Slam title at the French Open last year, Muguruza has struggled to return to the top and this is her first major semi-final since that Roland Garros triumph.

Muguruza, beaten by Serena in the 2015 Wimbledon final, will face Coco Vandeweghe or Magdalena Rybarikova in the last four.

The 23-year-old is being coached by Conchita Martinez, who became the only Spanish woman to win Wimbledon in 1994, and the lessons appear to have done the trick.

"I played good. I'm trying not to think a lot, just go for it and play my game. I'm happy it worked out," Muguruza said.

"It seems far away since I last made the final here. I'm a completely different player.

"It means a lot to make the semi-finals again, my breakthrough was here."

Following Venus onto Centre Court is Johanna Konta, who takes on Simona Halep bidding to become the first British woman to reach the semi-finals since Virginia Wade in 1978.

Not since Jo Durie in 1984 has Britain had a female representative in the last eight and Konta, hoping to become the first home winner of the Wimbledon women's title since Wade in 1977, has added incentive to go a step further against Halep after their stormy Fed Cup encounter earlier this year.

Konta was reduced to tears by what she felt were threats and intimidation from the Romanian fans in Constanta during her match against Sorana Cirstea, but Halep fanned the flames this week when she claimed her compatriots had done nothing wrong.

Halep has extra motivation of her own as a victory over Konta will guarantee she takes over from Angelique Kerber as the new world number one.

Comments
Topics mentioned in this article
Garbine Muguruza Tennis Svetlana Kuznetsova Venus Williams
Get the latest Cricket news, check out the India cricket schedule, Cricket live score . Like us on Facebook or follow us on Twitter for more sports updates. You can also download the NDTV Cricket app for Android or iOS.