Wimbledon 2017 Highlights: Garbine Muguruza stormed to her first Wimbledon title with a majestic 7-5, 6-0 victory over Venus Williams in the final. 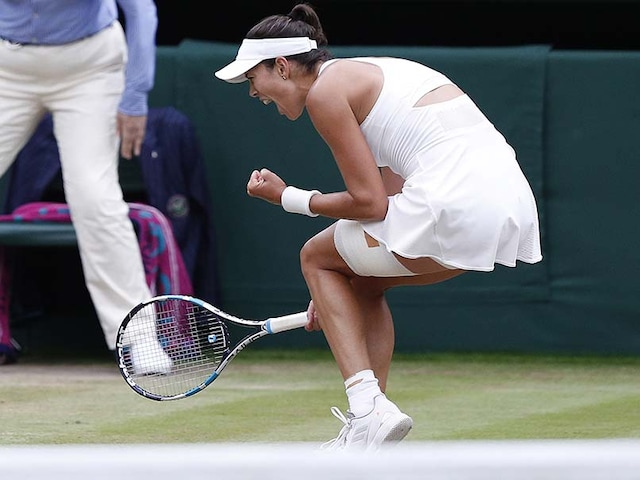 Garbine Muguruza beat American tennis veteran Venus Williams 7-5, 6-0 in the women's singles final of Wimbledon on Saturday. It was 23-year-old Muguruza's first Wimbledon title and second Grand Slam title -- the first was in French Open 2016. Muguruza, playing in just her fourth Wimbledon, reached the final two years ago as a virtually unknown player and was beaten in straight sets by Venus' sister Serena. She also became the first Spaniard to lift the women's trophy following her compatriot Conchita Martinez's win 23 years ago.

For the first time, @GarbiMuguruza is the #Wimbledon champion... pic.twitter.com/0IQyg2jfar

19:58 IST: Championship point for Muguruza. A loud cheer from the crowd.

19:54 IST: And, Muguruza does in style once again. She leads the second set 5-0. The Spaniard is just one game away from the title.

19:51 IST: A long rally and Muguruza smashes a powerful backhand. She leads the second set 4-0.

Make that six straight games...@GarbiMuguruza gets another break in the second set to move 3-0 up against Venus Williams#Wimbledon pic.twitter.com/we17tj35vC

How momentum can change...

From two set points down, @GarbiMuguruza has now won five games in a row to take a 2-0 lead in the second set pic.twitter.com/v4Lws5u0Jo

19:44 IST: Another lovely backhand from Muguruza. She makes it 2-0 in the second set.

Venus up against it...

The American double faults to hand Garbine Muguruza a break at the start of the second set#Wimbledon pic.twitter.com/DQ8eq234Zc

One of the best first sets I have seen at @Wimbledon #Muguruza #Williams in a final ...

The tale of the tape in the first set...#Wimbledon pic.twitter.com/AsieyNkO0E

19:31 IST: What a rally! Muguruza wins the long-rally battle. She is one point away from the winning the set.

19:27 IST: Muguruza makes it 6-5 with a solid forehand. What a comeback from the Spaniard. She is just a game away from winning the opening set.

After saving two set points on her own serve, Garbine Muguruza then claims the first break of the match to take a 6-5 lead...#Wimbledon pic.twitter.com/OIS4sUH2F7

19:21 IST: What a performance from Muguruza. She wins back-to-back games and makes it 5-5 in the opening set.

A final living up to its billing...

19:17 IST: A solid backhand and Venus makes it 5-4. She is just one game away from winning the first set.

But the No.10 seed holds her nerve to save break point and regain the lead at 4-3 in the first set#Wimbledon pic.twitter.com/sdNZ4WHseC

19:01 IST: Muguruza takes the game and makes it 3-3 in he opening set against Venus Williams.

19:00 IST: Incredible movement from Venus Williams. She goes back and smashes a solid forehand. It's 40-30. Can she take fourth game to make it 4-2 in the opening set?

18:53 IST: Brilliant comeback from Muguruza. She makes it 2-2 in first set against Venus.

18:45 IST: Venus takes the first game. Brilliant display from the American. She leads the first set 1-0.

18:43 IST: A loud cheer as Venus Williams arrives. She is aiming her 6th Wimbledon title today.

18:35 IST: Today, 12-year-old Rebecca will perform the Ladies' Singles Final coin toss. This is her story..

18:33 IST: Both the finalists - Venus and Muguruza - have arrived. A loud cheer from the crowd.

18:31 IST: Venus has 3-1 edge in her career against Muguruza, but the Spaniard won this year in Rome.

It's nearly time to take your seats....

18:21 IST: Venus Williams aiming for her 6th Wimbledon title. Can she do it today?

The waiting is over #Wimbledon pic.twitter.com/sbJ4CEVjRJ

17:50 IST: Garbine Muguruza will be hoping to win her maiden title on SW19 while Venus Williams wants the trophy for the sixth time in her career. Who will emerge triumphant?

17:49 IST: Hello and welcome to the live blog of the women's singles final at Wimbledon.

The 2016 French Open champion reached the Wimbledon final for the first time in 2015, when she lost to American legend Serena Williams. Venus, eyeing her eighth Grand Slam title, ended Britain's hope for a local women's single champion since Virginia Wade in 1977 and any hope of a British champion in the singles this year as she ousted Konta on the heels of Andy Murray's shocking defeat in the previous round.

Comments
Topics mentioned in this article
Venus Williams Garbine Muguruza Tennis Live Blogs
Get the latest Cricket news, check out the India cricket schedule, Cricket live score . Like us on Facebook or follow us on Twitter for more sports updates. You can also download the NDTV Cricket app for Android or iOS.