Rafael Nadal sailed into the quarterfinals of the US Open with an efficient win over 2014 champion Marin Cilic. 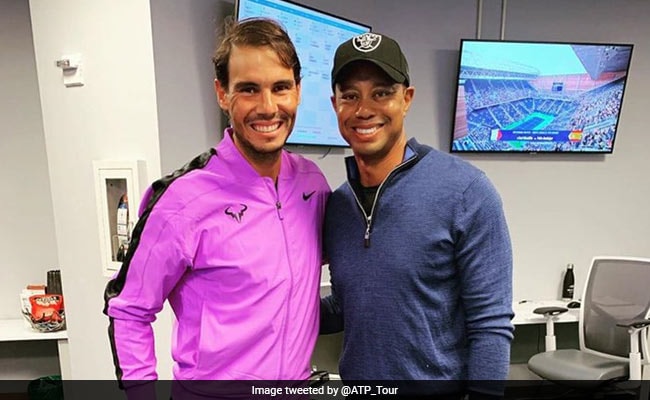 Rafael Nadal was cheered on by none other than golf legend Tiger Woods at the US Open.© Twitter

Rafael Nadal coasted into the US Open quarter-finals, beating 2014 champion Marin Cilic 6-3, 3-6, 6-1, 6-2 in the Round of 16 match. The Spanish second seed was cheered on by none other than golf legend Tiger Woods as Rafael Nadal ramped up his quest for a fourth US Open title. Nadal dazzled the Arthur Ashe Stadium with a superlative performance but it was the reaction of Woods, a winner of 15 golf majors, to an assortment of sensational Nadal winners during a crucial section of the match that caught the eye. A blistering cross-court backhand passing winner off a Cilic overhead elicited a fired-up fist-pump from Woods, who was equally appreciate of an outrageous round-the-netpost forehand that brought up match point.

Rafael Nadal called Tiger Woods an "amazing inspiration" after the Spaniard advanced to a 40th Grand Slam quarterfinal appearance, nine of which have come at the US Open.

"It means a lot to me to have him supporting. As I said, he's an amazing inspiration, all the things that he accomplishes in the sport, the way that he managed to keep fighting that hard," Nadal said.

"Watching him on the golf course, has been an example, a real inspiration for me. (To) have him supporting and be able to be in touch with him very often for me is something that I am super happy and I hope one day we can play golf and tennis together."

Tiger Woods made a successful return to top flight golf in 2018, winning the season-ending Tour Championship after missing most of the previous two years through a debilitating back injury.

In April, he won his 15th major after completing a memorable victory at the Masters, his first major win since the 2008 US Open.

"It's a big pleasure to have him here, he's one of the greats of sport and I want to congratulate him on one of the most amazing comebacks in sport, winning the Masters this year," Nadal said, suggesting his own golf game lagged far behind his ability with a racquet.

"It is much better if Tiger does not see my swing. Maybe he would lose a bit of rhythm after that."

Comments
Topics mentioned in this article
Rafael Nadal Marin Cilic Tiger Woods Tennis
Get the latest updates on IPL 2021, IPL Points Table , IPL Schedule 2021 , live score . Like us on Facebook or follow us on Twitter for more sports updates. You can also download the NDTV Cricket app for Android or iOS.