Simona Halep's victory over third seed Garbine Muguruza also means she will retain the world number one ranking next week. 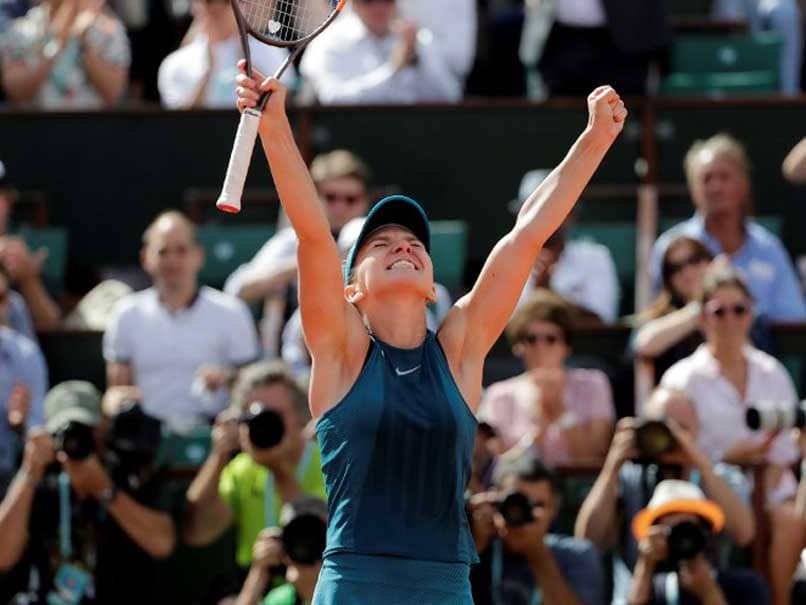 Simona Halep has now defeated Garbine Muguruza in both their meetings on clay.© AFP

Top seed Simona Halep reached her third French Open final on Thursday with a 6-1, 6-4 victory over former champion Garbine Muguruza. Halep, the runner-up in 2014 and 2017, will face either Sloane Stephens or Madison Keys in Saturday's final. Her victory over third seed Muguruza also means she will retain the world number one ranking next week. "I am really happy that I won the match, it was very important for my mind and I gave it all I had," said Romanian star Halep. After racing through the first set, Halep saved three break points in a marathon ninth game of the second which lasted 13 minutes.

"I think I played one of my best matches on clay against a great opponent," added Halep, who will be appearing in her fourth final at the majors having also been beaten in Australia in January.

"I was 2-4 down in the second set but I knew I had to fight for every ball, push her back and play the way I did in the first set."

Halep has now defeated Muguruza in both their meetings on clay.

However, her sights now turn to the final where she is desperate to erase the memories of last year's horror show where she surrendered a set and a 3-0 lead to lose to Jelena Ostapenko.

"I have another chance to be in the final and hope to do better than last year."

Halep raced into a 5-0 lead in the first set against misfiring 2016 champion Muguruza who had blasted Maria Sharapova off court on Wednesday for the loss of just three games.

The 24-year-old Spaniard stopped the rot in the sixth game before Halep quickly reasserted her authority.

A sweeping, running forehand into an open court gave her the set with Muguruza having managed just two winners.

It was the first set that the Wimbledon champion had dropped at Roland Garros this year.

She also failed to win a single service game in the opener.

Muguruza settled down in the second set, moving 2-0 ahead before Halep levelled in the eighth game.

That set the stage for the lengthy ninth game where Halep stood firm.

The spirit ebbed away from Muguruza, who converted just two of the eight break points she carved out, and a backhand which sailed long sealed her fate in the 10th game.

In Thursday's other semi-final, US Open champion Stephens will take on fellow American and close friend Keys who she beat 6-3, 6-0 in the final in New York last September.

"When we get on the court, it's time to compete. But before that, we are not going to be weird and awkward and make it, like, weird for each other," said Stephens, who was close to going out in the third round to Camila Giorgi before winning 8-6 in a deciding set.

It is the first time that two American women have reached the last four at Roland Garros since 2002, when Serena Williams beat sister Venus in the final, after a semi-final win over Jennifer Capriati.

Stephens, who is now into the semi-finals of a major for the third time, leads Keys 2-0 in head-to-heads but they have never met on clay.

Comments
Topics mentioned in this article
Garbine Muguruza Simona Halep Tennis
Get the latest updates on IPL 2020, check out the IPL Schedule for 2020 and Indian Premier League (IPL) Cricket live score . Like us on Facebook or follow us on Twitter for more sports updates. You can also download the NDTV Cricket app for Android or iOS.