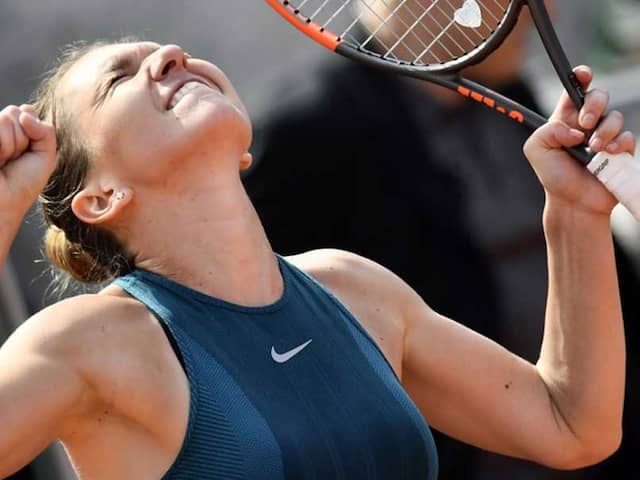 Simona Halep insists she feels "no pressure, no expectation" as she looks to reach a fourth Grand Slam final at the French Open on Thursday. The 26-year-old Romanian tackles 2016 Roland Garros winner and reigning Wimbledon champion Garbine Muguruza for a place in Saturday's final. World number one Halep was runner-up in Paris in 2014 where she was beaten by Maria Sharapova and last year, going down to Jelena Ostapenko after squandering a set and 3-0 lead. Her Slam misery continued at the Australian Open in January where she lost in three sets to Caroline Wozniacki.

"I just want to play as I did today, and as I did every day. If I do that, I will be okay after the match, no matter the result."

On Wednesday, Halep looked anything but the top seed, slipping 4-0 down in the first set before she rallied to defeat Kerber, a two-time major winner who had exited in the first round in Paris in the last two years.

It was also a match which witnessed a colossal 99 unforced errors.

Halep is aware she cannot afford another poor start on Thursday against 24-year-old Muguruza who has been tested just once in Paris and that was in the first round where fellow former winner Svetlana Kuznetsova pushed her to a tiebreak in the first set.

The Spanish third seed thrashed Sharapova 6-2, 6-1 in the quarter-finals, condemning the Russian to her worst Grand Slam defeat in more than six years.

The winner of Thursday's semi-final will also decide the world number one spot which Muguruza held for four weeks last year.

"It's not that important, because it's constantly this thing going on," said Muguruza.

"Before, I gave it a lot of importance so that's why you're fighting every week, and I got there."

Muguruza holds a 3-1 career edge over Halep in head-to-head meetings but the Romanian won their only clash on clay in Stuttgart in 2015.

Sharapova, playing at Roland Garros for the first time since 2015, suffered her most one-sided defeat at the Slams since a 6-3, 6-0 loss to Victoria Azarenka in the 2012 Australian Open final.

The 2012 and 2014 Paris champion, who missed the 2016 tournament because of a doping ban and last year when she was refused a wild card, was broken six times, committed 27 unforced errors and won just five points on her own serve in the second set.

It was just her fifth loss in 25 Grand Slam quarter-finals.

"To have had the victories that I have had, to have the results that I have, obviously moving a step in the right direction," said Sharapova who had made the last-eight in Madrid and semis in Rome in the run-up to Paris.

"But today was certainly not one of those steps."

In Thursday's other semi-final, US Open champion Sloane Stephens will take on fellow American and close friend Madison Keys who she beat 6-3, 6-0 in the final in New York last September.

"When we get on the court, it's time to compete. But before that, we are not going to be weird and awkward and make it, like, weird for each other," said Stephens, who was close to going out in the third round to Camila Giorgi before winning 8-6 in a deciding set.

It is the first time that two American women have reached the last four at Roland Garros since 2002, when Serena Williams beat sister Venus in the final, after a semi-final win over Jennifer Capriati.

Stephens, who is now into the semi-finals of a major for the third time, leads Keys 2-0 in head-to-heads but they have never met on clay.

Comments
Topics mentioned in this article
Simona Halep Tennis Garbine Muguruza
Get the latest Cricket news, check out the India cricket schedule, Cricket live score . Like us on Facebook or follow us on Twitter for more sports updates. You can also download the NDTV Cricket app for Android or iOS.