Novak Djokovic saw off the challenge of Matteo Berrettini in just 64 minutes, converting five of seven break points and out-serving his 23-year-old opponent. 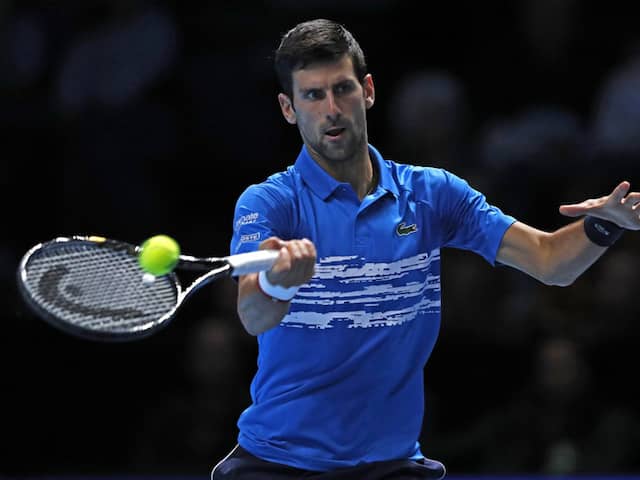 Novak Djokovic began his quest for a record-equalling sixth ATP Finals title and sixth year-end number one spot on Sunday with an imperious 6-2, 6-1 victory against Italy's Matteo Berrettini. The Serbian was last week nudged off the top position in the rankings by Rafael Nadal, who is also in the eight-man field in London. Djokovic must reach the final at the O2 Arena to stand any chance of dislodging Nadal but there are major questions over the Spaniard's fitness. If the Serbian does claim the year-end number one ranking for a sixth time, he would match the record of Pete Sampras and victory at the end-of-season event would equal Roger Federer's mark.

The second seed saw off the challenge of Berrettini in just 64 minutes, converting five of seven break points and out-serving his 23-year-old opponent.

"It feels great to be back," said the Wimbledon champion. "Earlier this year I had a great stay in London, and over the years I've played well in this arena.

"It was not easy for him at his first Finals match, I knew he would be nervous at the beginning and I used my experience to perform well."

"I've been enjoying the conditions here for many years," he added. "It's suitable to my game, but it's never easy playing a big server like Matteo."

Eighth-seed Berrettini, appearing at the ATP Finals for the first time, went toe to toe with Djokovic at the start of the match but the Serbian broke in the sixth game.

From 2-2 in the first set, Djokovic ran through the next eight games for a commanding 4-0 lead in the second set, until the Italian halted his opponent's charge with a break of his own.

But the unflappable 16-time Grand Slam champion broke immediately and completed victory with a routine forehand winner off his own serve to take the set 6-1.

The other two members of Group Bjorn Borg are Federer and Dominic Thiem of Austria, who meet in the evening match.

Germany's Alexander Zverev shocked Djokovic in last year's final but the Serbian is the firm favourite in London after cantering to victory at last week's Paris Masters.

Federer, Nadal and Djokovic were the top three seeds when they first competed together at the tournament way back in 2007 and are still the men to beat 12 years later.

Nadal, who has never won the event, is bidding to clinch the year-end number one spot in the ATP rankings for a fifth time.

The tournament, featuring the year's best eight players, is contested in a round-robin format with the best four players and doubles teams reaching the knockout semi-finals stage.

Nadal begins his campaign on Monday against defending champion Zverev.