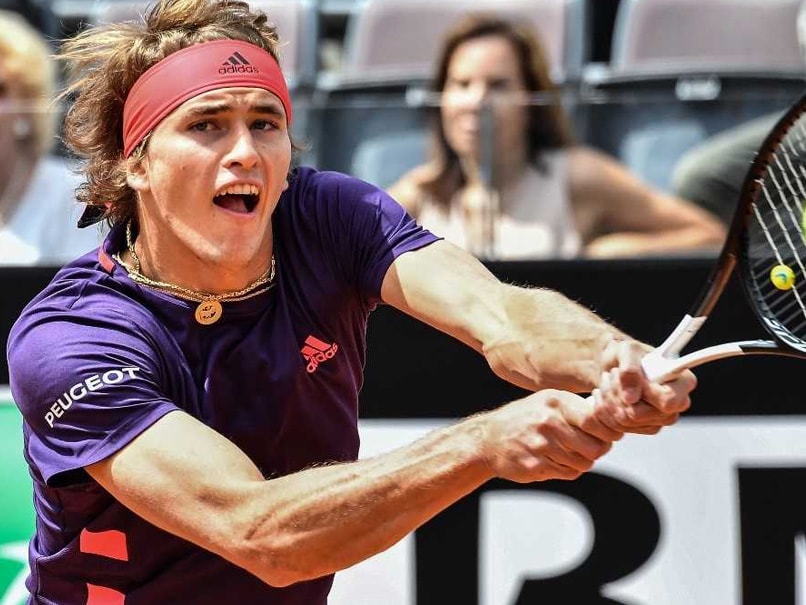 Two-time women's holder Elina Svitolina crashed out of the WTA and ATP Italian Open on Tuesday along with Germany's Alexander Zverev as Serena Williams's return to the courts was short lived with her knee injury flaring up to force the American star out of the final warm-up before the French Open in two weeks times. Svitolina -- who had a first round bye as fifth seed -- held a match point at 5-2 in the third set before slumping 6-4, 1-6, 7-5 to Belarus Victoria Azarenka in a 2hr 14min battle at the Foro Italico which was twice interrupted because of rain.

Serena earlier announced she was withdrawing having just returned after two months out injured, before she was due to play her older sister Venus for the first time in 21 years in Rome.

The 37-year-old had eased past Sweden's Rebecca Peterson in her first round match on Monday, but a day later could not continue "due to pain in my left knee".

"I'll be concentrating on rehab and look forward to seeing you all at the French Open and next year in Rome," Serena said in a statement.

Her withdrawal sends Venus, the 1999 winner, through to a third round meeting with either Britain's Johanna Konta or US seventh seed Sloane Stephens.

There are now doubts whether Serena can target a record-equalling 24th Grand Slam title in Paris, having played just nine matches this year, and one on clay.

Her last Grand Slam singles title was won at the Australian Open in 2017, where she was pregnant, breaking a tie with Steffi Graf for the most, and she is just one short of Margaret Court.

The three-time French Open winner revealed getting back to fitness has been tougher than she had expected.

"I haven't been able to train or practice a lot, I was out much longer than I expected," she explained.

Nevertheless, last year she arrived at Roland Garros without any clay-court warm-up and still reached the last 16 before retiring before her match against Maria Sharapova, also because of injury.

Svitolina and Azarenka battled late into the night at the Foro Italico before former two-time Australian Open winner Azarenka won through.

Svitolina came back after the rain break to drop the second set but rolled off the first three games in the third, before being broken when serving for the match at 5-2 in the third set.

Azarenka saved match point and took the next game for love, rolling off five in a row to set up a meeting former French Open winner Garbine Muguruza or Danielle Collins for a place in the third round.

Collins advanced past former world number one Caroline Wozniacki who retired with a lower leg injury, after losing the first set 7-6 (7/5).

Czech fourth seed Karolína Plisková eased through to the third round along with Australian Ashleigh Barty, the eighth seed.

In the men's competition, world number five Zverev, the 2017 winner and runner-up to Novak Djokovic last year in Rome, extended his terrible clay-court run, falling 7-5, 7-5 to Italian wild card Matteo Berrettini in the second round.

"The match that I played was horrendous," said Zverev, who has won just four matches on clay this season, including a run to the quarter-final of the Madrid Open where he was the defending champion.

"I've lost my voice screaming, I'm overjoyed. This is a victory that charges me," said 33rd-ranked Berrettini.

Belgian David Goffin rallied from a set down to beat former French Open champion Stan Wawrinka 4-6, 6-0, 6-2 to set up a meeting with Argentine seventh seed Juan Martin Del Potro for a place in the third round.

"I knew it was going to be tough today because I haven't played much on clay," said Kyrios, who next plays Norwegian qualifier Casper Ruud.

Sousa, who also trailed 1/4 in the deciding set tie-break, will play third seed Roger Federer in the second round.

Eight-time Rome winner Rafael Nadal will start his tournament against Jeremy Chardy on Wednesday, after the Frenchman beat compatriot Richard Gasquet 6-1, 4-6, 6-3 in a match suspended overnight on Monday.

Comments
Topics mentioned in this article
Elina Svitolina Alexander Zverev Serena Williams Tennis
Get the latest updates on India vs South Africa and check out  Schedule, Results and Live Score. Like us on Facebook or follow us on Twitter for more sports updates. You can also download the NDTV Cricket app for Android or iOS.