Daniil Medvedev lost his cool when he said he saw Stefanos Tsitsipas receive coaching from his father during their Australian Open semi-final. 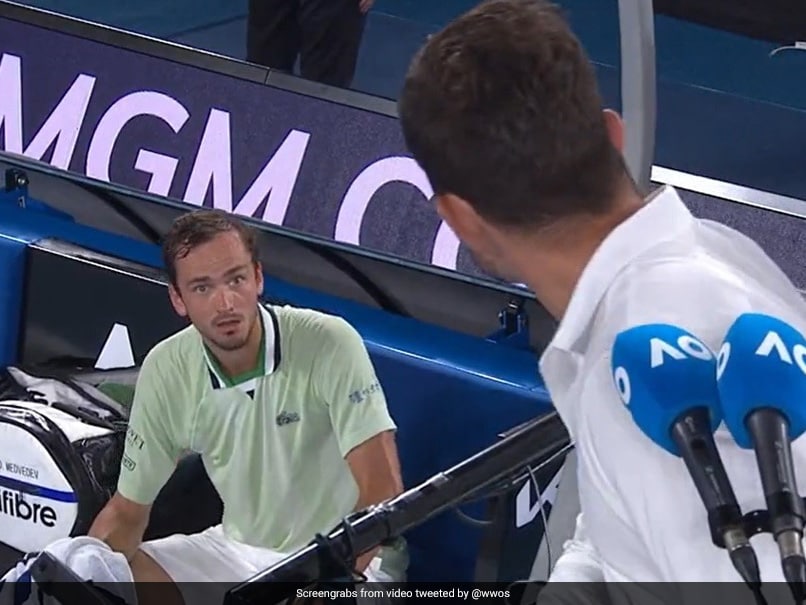 Daniil Medvedev lost his cool during an angry exchange with the chair umpire on Friday.© Twitter

Daniil Medvedev defeated Stefanos Tsitsipas 7-6 (5), 4-6, 6-4, 6-1 in the men's singles semi-finals of the Australian Open on Friday to book himself a meeting in the final against Rafael Nadal. In a tight contest in Melbourne, Medvedev and Tsitsipas were neck and neck till mid-way through the third set when Medvedev took control of the match. Well before securing the win, Medvedev lost his cool when he said he saw Tsitsipas receive coaching from his father. Court-side coaching is not allowed during tennis matches and Medvedev couldn't maintain his cool when he felt the chair umpire was giving Tsitsipas a free pass.

Channeling his inner John McEnroe, Medvedev screamed at the chair umpire: "Are you stupid? His father can talk every point?"

The 25-year-old Russian player didn't seem assured by the umpire's response. "Can you answer my question please?" he continued.

"Oh my god, how can you be so bad in semi-final of a Grand Slam? Look at me, I am talking to you," Medvedev added before the umpire spoke to him again and tried to calm things down.

Watch the video of the exchange between Medvedev and the chair umpire here:

Watch what went down.

The Russian later managed to outdo his rival to secure a place in the final.#AO #AO2022 #AustralianOpen pic.twitter.com/Kvep5FXAgG

Despite losing his calm, Medvedev maintained his composure inside the court and dominated the proceedings from the third set.

Having won the first set in a tie-breaker and then losing the third 4-6, Medvedev won the third set 6-4.

He continued his domination in the fourth set and broke Tsitsipas twice to take the set 6-1 and seal a four-set win.

In the final on Sunday, Medvedev will face Rafael Nadal as the latter aims to win a record 21st Grand Slam title.

Comments
Topics mentioned in this article
Tennis Daniil Medvedev Stefanos Tsitsipas
Get the latest updates on ICC Women's Cricket World Cup 2022 and IPL 2022, check out the Schedule , Live Score and IPL Points Table. Like us on Facebook or follow us on Twitter for more sports updates. You can also download the NDTV Cricket app for Android or iOS.