Umpire Alison Hughes was lucky to escape injury as the spider-cam ripped the sun shield right off her chair. 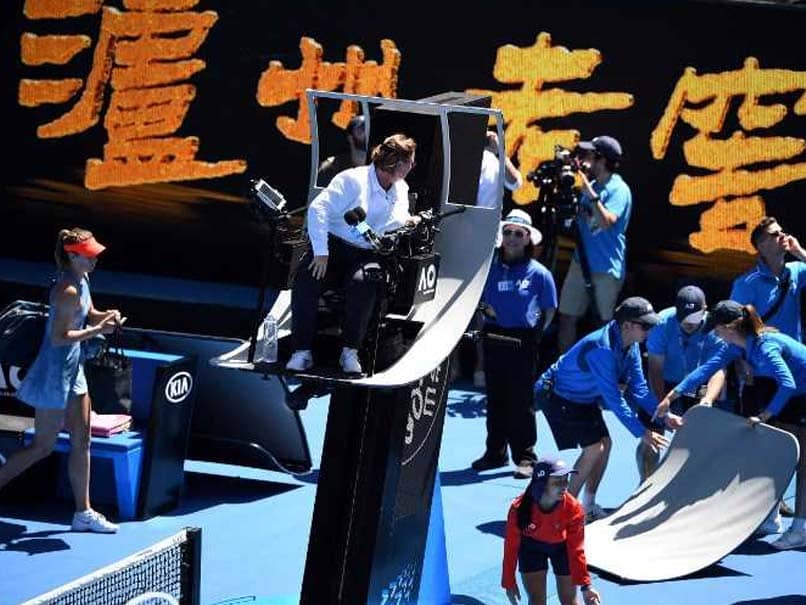 The spider-cam crashed into the sun shield of umpire Alison Hughes, narrowly missing her head.© AFP

Chair umpire Alison Hughes survived a close shave at the Australian Open when a spider-cam smashed into the sun shield placed above her chair. Hughes was lucky to escape injury as the spider-cam ripped the protective shield right off her chair. The incident took place during the Round of 16 women's singles match between Australian 15th seed Ashleigh Barty and Russian five-time Grand Slam champion Maria Sharapova. Fans on social media platforms were left shell-shocked by the incident and called for more safety for players and officials alike.

In the immediate aftermath the spider-cam, which hovers above the court on a cable, moving vertically and horizontally to offer an overhead perspective, attempted to swoop down closer to the action.

Instead the camera crashed into the sun shield of shocked umpire Alison Hughes, removing it completely and narrowly missing her head.

Stunned by the spider-cam malfunction, fans took to Twitter to express their concern.

Another social media user Richard Ings said people should not underplay how serious the incident was.

One cannot express how serious this incident is.

The workplace should be safe.

The camera at that speed could literally have killed the chair umpire.

Where was the risk management plan to ensure the risk of injury from this spider cam was mitigated?

Barty, backed by a boisterous Australian crowd, staged a stunning turnaround in the biggest match of her career, beating the 2008 champion to reach her first Grand Slam quarterfinal.

After dropping the first set, the 15th seeded Australian registered a thrilling victory, capped with a dramatic final game in front of a packed home crowd.

She became just the fourth Australian female quarter-finalist at Melbourne Park, and the first since Jelena Dokic made a thrilling run to the last eight in 2009.

With Alex de Minaur, Alex Bolt and Alexei Popyrin all falling in third round of the men's draw, Barty is the sole Australian standing at the Australian Open.

Comments
Topics mentioned in this article
Maria Sharapova Ashleigh Barty Tennis
Get the latest updates on India vs Australia Series, check out the India vs Australia Schedule for 2020-21 and Ind vs Aus live score . Like us on Facebook or follow us on Twitter for more sports updates. You can also download the NDTV Cricket app for Android or iOS.