Watch: David Wiese Breaks Down As Namibia Get Knocked Out Of T20 World Cup

T20 World Cup: David Weise's 55 off 36 went in vain as UAE defeated Namibia by 7 runs in a last-over thriller to knock the team out of the event. 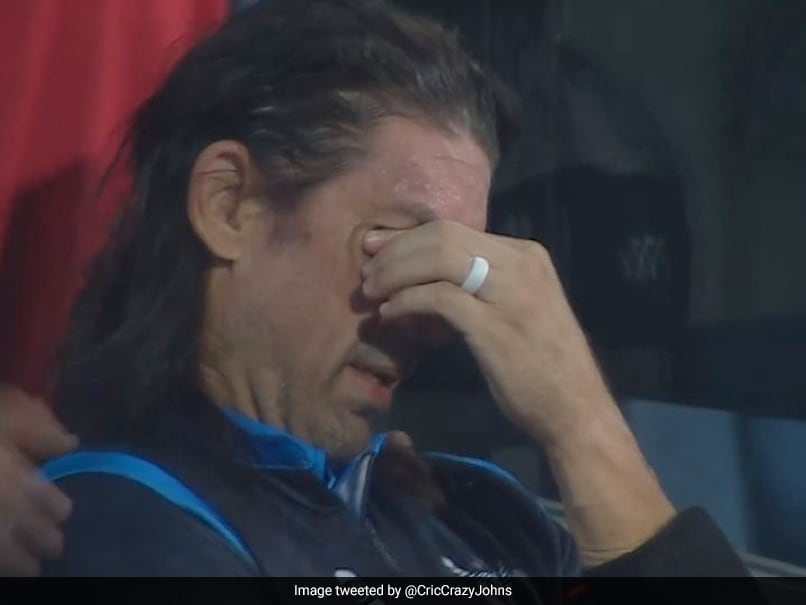 T20 World Cup: David Wiese scored a quick-fire fifty but failed to win the game for his side.

David Weise's 55 off 36 went in vain as UAE defeated Namibia by seven runs in a last-over thriller at Simonds Stadium, Geelong on Thursday. UAE posted 148 for 3 in the final Group A match of the first round of the ongoing T20 World Cup before stopping Namibia to 141 for 8 despite Weise's blitzkrieg. The loss to Namibia saw them being knocked out of T20 World Cup. Wiese failed to win the game for his side and was visibly hurt by that.

After the match, the all-rounder broke down in tears as he failed hard to contain his emotions.

UAE's win over Namibia kept both the sides to two points each and thus Netherlands, having four points in kitty, marched into the Super 12s, following table-toppers Sri Lanka from Group A.

Talking about the Namibia vs UAE game, Muhammad Waseem scored 50 runs off 41 balls while skipper Chundangapoyil Rizwan hit 43 not out off 29 balls as UAE posted a competitive total on the board after opting to bat first. Wiese had returned figures of 1 for 27 in his four overs, while Bernard Scholtz and Ben Shikongo also claimed a wicket each.

In reply, Namibia were lagging behind in the chase but Wiese's knock brought them back and kept them in the hunt. However, it failed to win the game for the side.

Namibia ended their campaign at the third spot in the Group A table with two points and a net run rate of +0.730, while UAE ended at the bottom-most spot in the four-team table.

United Arab Emirates ICC T20 World Cup 2022 Namibia vs United Arab Emirates, Match 10
Get the latest updates on IPL Auction 2023 and check out  IPL 2023 and Live Cricket Score. Like us on Facebook or follow us on Twitter for more sports updates. You can also download the NDTV Cricket app for Android or iOS.