Katrina Kaif faced the bowling of Harbhajan Singh, one of India's greatest spinners, during a promotional event 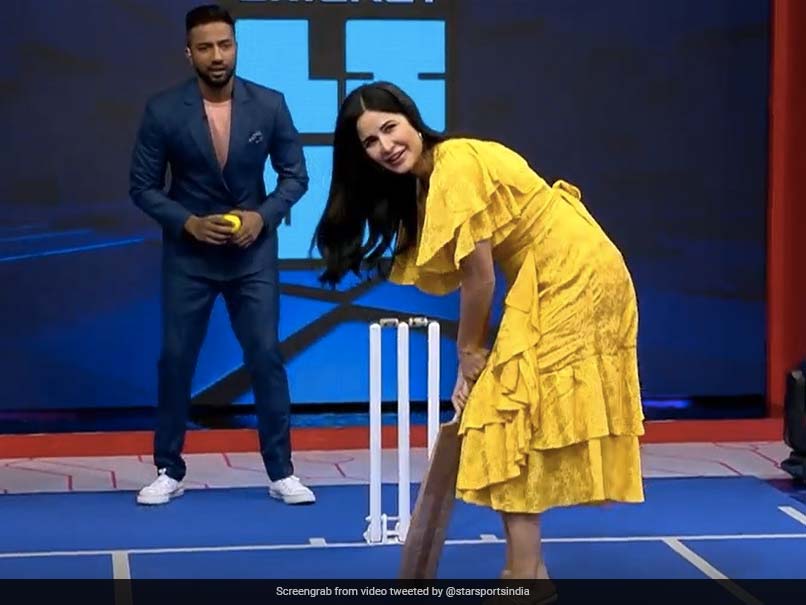 Katrina Kaif is one of most popular Indian film actors currently. While her skills on the big screen is known to all, on Sunday, fans were witness to her cricket skills. She came to the Star Sports studio, ahead of India's Group 2 match against South Africa, to promote her upcoming film 'Phone Bhoot'. There she faced the bowling of Harbhajan Singh, one of India's greatest spinners. While it was a fun-filled interaction, Katrina did middle the ball well against Harbhajan.

Talking about the match, Suryakumar Yadav played the best knock of his short international career but South Africa exposed India's inadequacies against extreme pace and bounce to win a low-scoring thriller. While Surya's 68 off 40 balls will easily qualify as one of the most accomplished knocks in adverse conditions, India's defence of a below-par total of 133 for 9 was always going to be a challenge. Arshdeep Singh, the lion-hearted left-armer, did bowl another dream first spell but Aiden Markram (52 off 41 balls) and David Miller (59 not out off 46 balls), one of the best T20 finishers in the game, ensured the target was achieved in 19.4 overs.

While South Africa (5 points 3 games) are now on top of group 2, India (4 points from 2 games) with upcoming matches against Bangladesh (Nov 2 in Adelaide) and Zimbabwe (Nov 6 in Melbourne) are well within striking distance of a semi-final berth.

The team that may pay the price for India's defeat is Pakistan, who now have an uphill task at hand.

India made a match of it on tournament's spiciest track in cold conditions but Virat Kohli's costly miss of Markram at deep mid-wicket off Ravichandran Ashwin's bowling along besides some close run-out chances cost India dearly.

But certainly not more than inept show from top-order save Surya, who was once again the saving grace and shining light. Perhaps the world's most decorated T20I batter in recent times, Surya's pulled six and a bowler's back-drive boundary off Lungi Ngidi to complete his half-century will be remembered for times to come.

Those were the only boundaries scored off Ngidi, who enjoyed a wonderful evening with figures of 4 for 29 that laid bare the frailties of the Indian top-order when there is pace off the track and the ball starts rearing up from back of length.

On a track where good technique and steely temperament was needed, Surya added another component to it – swagger. At 49 for 5, India looked deep down the barrel as some of the top-order players were failing to get their bats down in time as the ball reached the keeper's gloves.

In a stand of 52, he shielded veteran Dinesh Karthik (6 off 15 balls), who is not exactly known for sound technique on bowler friendly tracks. On a bouncy track, the key element is to shuffle and come inside the line of deliveries and ride the bounce. The Mumbaikar exactly did that time and again on Sunday night.

India Cricket Team ICC T20 World Cup 2022 Cricket
Get the latest updates on IPL Auction 2023 and check out  IPL 2023 and Live Cricket Score. Like us on Facebook or follow us on Twitter for more sports updates. You can also download the NDTV Cricket app for Android or iOS.