Sri Lanka vs India: Shikhar Dhawan shared an Instagram reel where he can be seen playing Kishore Kumar's "Sham Mastani" on a flute. 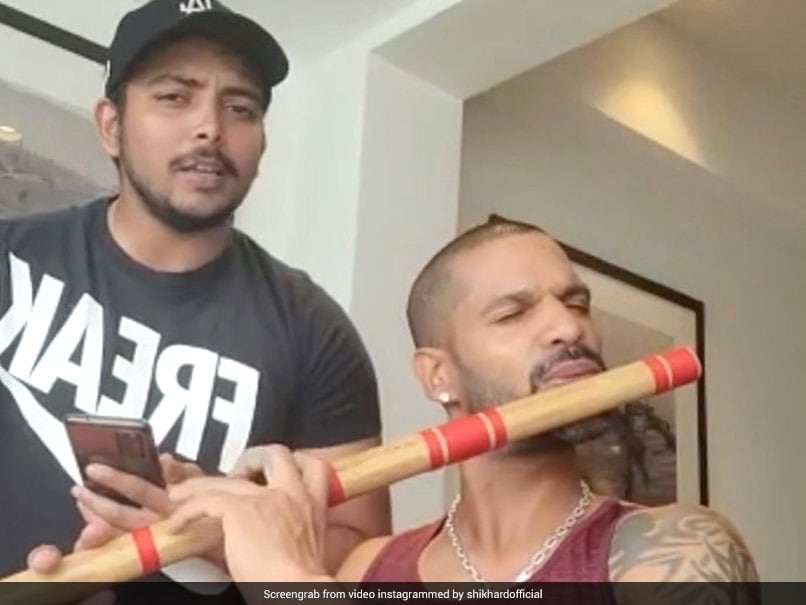 Shikhar Dhawan shared a video of him playing flute.© Instagram

Shikhar Dhawanand Prithvi Shaw are enjoying their time away from the field in a very different way. Dhawan shared an Insta reel on Thursday, where he can be seen playing flute and Prithvi Shaw was vibing to the tune. Dhawan was playing Kishore Kumar's "Sham Mastani" song with his flute. "Thursday tunes featuring our in-house superstar singer Prithvi Shaw @prithvishaw," Dhawan wrote on Instagram. The reel was well received by the fans and got more than 1.41 lakh views within an hour of it being posted.

Dhawan is the captain of theIndian teamthat will play three ODIs and as many T20Is against Sri Lanka, starting July 18. This is also the first time that he will be leading the Indian side. Earlier, the series had been delayed by five days after few positive cases in the Sri Lanka camp.

The Sri Lankan series will also be India's last limited-overs series ahead of the World T20 that will be played in the United Arab Emirates in October-November. Team India might try up few combinations to find their best eleven for the mega event in UAE, and at the same time, they would also look to give chances to the younger players.

Dhawan will also be fighting for his spot for the T20 World Cup along with others like Prithvi Shaw, Ishan Kishan, and Suryakumar Yadav. In the bowling department, standing vice-captain Bhuvneshwar Kumar will lead the pace attack in the absence of Jasprit Bumrah and Mohammed Shami.

The first ODI will be played at R Premadasa Stadium, Colombo on Sunday, July 18.

Sri Lanka Cricket Team Sri Lanka vs India, 2021 Cricket
Get the latest updates on Fifa Worldcup 2022 and check out  Fifa World Cup Schedule, Stats and Live Cricket Score. Like us on Facebook or follow us on Twitter for more sports updates. You can also download the NDTV Cricket app for Android or iOS.