Brock Lesnar made history in Saudi Arabia as he became he first ever two-time Universal Champion. 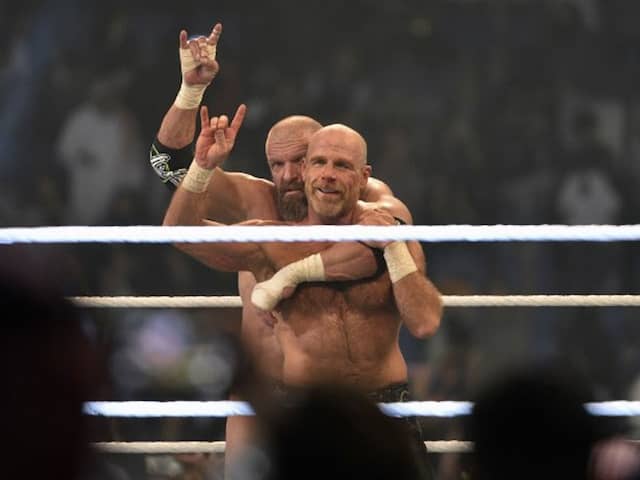 Shawn Michaels came out of retirement to partner Triple H as DX battled The Brothers of Destruction.© AFP

The WWE returned to Saudi Arabia with Crown Jewel and stars such as Brock Lesnar, Seth Rollins, AJ Style brawled and snarled in the ring, sending a roar rippling through a soccer stadium packed with thousands of fans in Riyadh's King Saud University on Friday. With thumping rock music and a dazzling fireworks display, Hulk Hogan, the host for the evening, swaggered to the ring wearing bright yellow sunglasses and a red bandana. Addressing the crowd as "maniacs", he declared, "It's awesome to be here!"

Hulk Hogan made his first WWE in-ring appearance since his dismissal three years ago.

Hogan was let go in 2015 after a tape was released showing him making a racist remark but WWE brought him back recently after the WWE Hall of Famer repeatedly apologised for the incident.

At the Crown Jewel extravaganza, Shawn Michaels came out of retirement to partner Triple H as D-Generation X battled The Brothers of Destruction in a truly star-studded show.

Braun Strowman faced Brock Lesnar to determine the next Universal Champion after the title was vacated by Roman Reigns.

In the kick-off match, Rusev came just a whisker away from winning the US Championship but Shinsuke Nakamura picked up a controversial victory.

AJ Styles picked up another big win over Samoa Joe, who replaced Daniel Bryan after the Smackdown superstar was removed from Crown Jewel

In the eight-man World Cup Tournament, Seth Rollins picked up a huge victory over Bobby Lashley in the first round.

Dolph Ziggler advanced to the World Cup semi-finals to face his nemesis Rollins.

The Miz became the second Smackdown superstar to make the World Cup semi-finals.

However, Shane McMahon shocked the WWE Universe when he took The Miz's place in the final after the Smackdown superstar picked up an injury before the bell and was unable to face Ziggler.

Sheamus and Cesaro retained their belts as SmackDown Tag Team Champions against The New Day thanks to Big Show's help.

In the biggest showdown of the night, Shawn Michaels made a triumphant return to a WWE ring after over eight years in retirement as he and his D-Generation X partner Triple H defeated the legendary Brothers of Destruction.