Virat Kohli took to Twitter to congratulate Vinesh Phogat on her fine achievement as she became the first Indian wrestler to seal a 2020 Olympics berth. 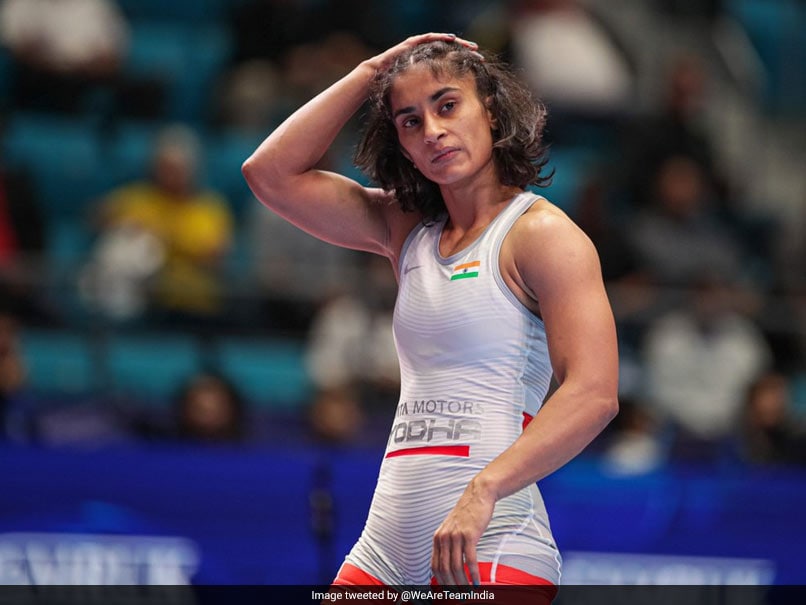 Vinesh Phogat was relieved after winning her 1st medal at the World Wrestling Championships.© Twitter

Virat Kohli on Thursday congratulated India's star wrestler Vinesh Phogat for winning a bronze medal in the 53kg class at the ongoing World Wrestling Championships in Nur-Sultan, Kazakhstan and securing a Tokyo Olympics quota. The Indian skipper took to Twitter to congratulate Vinesh on her remarkable achievement as she became the first Indian wrestler to seal an Olympics berth. Vinesh had already qualified for the Olympics by beating Sarah Ann Hildebrandt in her second repechage bout.

"Superb performance by @Phogat_Vinesh, for winning the Bronze medal at the World Championships and congratulations on qualifying for the @Tokyo2020 @Olympics," Kohli's congratulatory tweet read.

Superb performance by @Phogat_Vinesh, for winning the Bronze medalat the World Championships and congratulations on qualifying for the @Tokyo2020 @Olympics

Vinesh, high on confidence after securing an Olympic quota, then went on to pin her opponent Maria Prevolaraki in the bronze medal match to win India its first medal in the ongoing tournament.

Like Vinesh, Kohli also enjoyed a successful outing on Wednesday as India beat South Africa by seven wickets in the second Twenty20 International (T20I) at PCA Stadium in Mohali.

Kohli starred with the bat and scored unbeaten 72 off just 52 balls. With this win, India took an 1-0 unassailable lead in the three-match series, after the first match of the series was abandoned due to persistent rain without a ball being bowled.

Vinesh was relieved after winning her first medal at the World Championships. "It's a relief because now I have a lot of time to prepare for the Olympics. And it's a bronze only. I want to convert it to a gold and also win the Olympic medal," said Vinesh after the bout.

The Indian cricket team will now look to seal series when they take field at Bengaluru's M. Chinnaswamy Stadium on Sunday.

Punjab Cricket Association Stadium, Mohali India vs South Africa, 2019 Cricket Wrestling
Get the latest updates on Fifa Worldcup 2022 and check out  Fifa World Cup Schedule, Stats and Live Cricket Score. Like us on Facebook or follow us on Twitter for more sports updates. You can also download the NDTV Cricket app for Android or iOS.