The World Wrestling Championships saw Vinesh Phogat qualify for the Tokyo Olympics in 2020 and won a bronze medal in the 53 kg category. 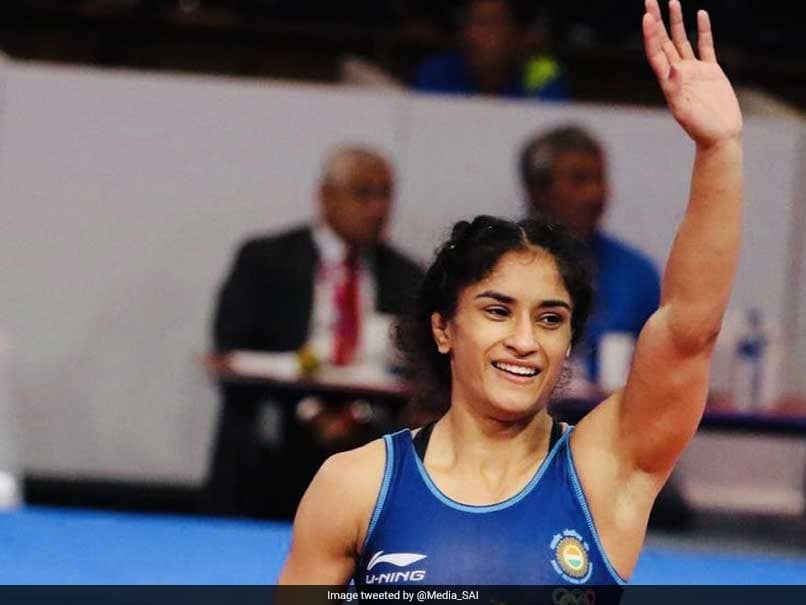 Indian wrestling had a lot to celebrate on Wednesday as Vinesh Phogat secured Tokyo Olympics qualification and won a bronze, while Pooja Dhanda put herself one win away from her second medal at the World Championships here. Having endured a medal-less run in three World Championships before, Vinesh finally ended the drought by pinning wrestler Maria Prevolaraki by fall in the bronze-medal bout. The 25-year-old Indian lost a point for passivity after Maria, the the two-time medallist, suffered a cut on her face in the beginning of the bout. Vinesh made two moves but Maria defended well to keep the narrow lead at the break.

Maria forced standing wrestling, locking Vinesh. The Indian attempted a double leg attack but Maria defended well. The Greek then put pressure on the Indian by grabbing her right leg.

Moments after Maria received treatment on her wound for a second time, Vinesh pulled off a four-point throw and kept her on ground to complete the win by fall.

Earlier in the day, she had held off world number one Sarah Ann Hildebrandt with some superlative defense in her second repechage round to qualify for the 2020 Olympics.

Vinesh is now one of India's most successful wrestlers with gold medals at the Commonwealth Games and the Asian Games, already in her cupboard.

Adding to the elation of the Indian camp was a gritty show by Pooja in the 59kg, a non-Olympic category.

Pooja reached the semifinals with a remarkable come-from-behind 11-8 win over Japan's Yuzuka Inagaki before losing the semifinal by technical superiority to Russia's Liubov Ovcharova, the 2017 European champion.

She will now fight for her second bronze medal at the Worlds, having won one in 57kg at the 2018 Budapest edition.

Pooja can now become the first female wrestler and only second Indian to win two World medals. Only Bajrang Punia has achieved the feat. He won a bronze in 2013 and a silver in 2018. In her bout for the Olympic qualification, at least five times, Hildebrandt had got hold of Vinesh's right leg but with her immense upper-body strength, the Indian did not let her rival take advantage and won 8-2.

After being placed in an extremely tough 53kg draw, Vinesh had lost to reigning champion Mayu Mukaida in the second round.

In her first repechage round, she had easily dispatched Ukraine's Yuliia Khavaldzhy Blahinya 5-0.

Navjot Kaur gave her a hug and the Indian camp, which has endured tough initial days, was gleaming.    At the beginning itself, Vinesh put pressure on Sarah, taking 2-0 lead with a take-down on double leg attack. The American thrice attacked Vinesh's right leg in the first period and twice in the second but the Indian kept her on the ground, using all her power.

That is what clinched it for Vinesh. Whenever she got the opportunity, she converted attacks into take-down points.

Countering the American was not new for Vinesh, who had beaten Sarah at the beginning of this season at Dan-Kolov tournament in Bulgaria, immediately after switching to 53kg category from 50kg. In the first repechage, the Ukrainian largely went for head-locks but Vinesh not only defended well but she timed her double-leg attacks to log take-down points. True to her style of wrestling, Pooja turned it around remarkably against Japan's Yuzuka Inagaki after trailing 0-5.

She got back in the match but was still behind 4-7. From there, she pulled off a sensational move, slipping from under the Japanese to go behind for a take-down.

With just 40 seconds left, she was still behind but the Indian soon pulled off a four-point move to take the lead and then held on to that to ensure her passage into semifinals.

Pooja, on the other hand, beat Belarus' Katsiaryna Hanchar by technical superiority in her pre-quarterfinal. Seema Bisla though missed Olympic qualification in the 50kg after losing her second repechage round 3-11 to Russia's Ekaterina Poleshchuk.

Much was expected from Sarita Mor after her shock victory over Pooja Dhanda in the trials but she was far from her usual aggressive self.

Up against Moldova's Anastasia Nichita, she remained defensive, losing the 57kg Qualification bout 1-5. She was ousted when Nichita lost her quarterfinal.

In the 76kg, Kiran had rattled her German opponent Aline Rotter Focken to lead 4-0 but lost five points in a row in the second period to lose the opening bout 4-5.

She paid the price for being over-defensive. Since the German lost her semifinal, Kiran's campaign is over.

Navjot Kaur was also ousted from 65kg after losing her opening bout to Azerbaijan's Alis Manolova, who later lost her semifinal.