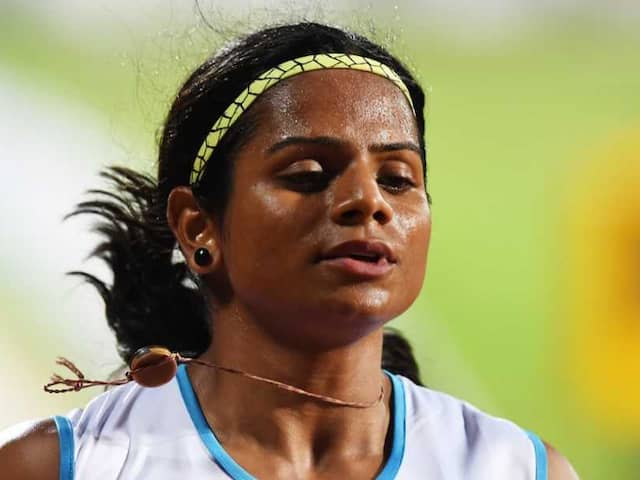 Dutee Chand is currently training for the World Championships.© AFP

Dutee Chand, the Indian sprinter, revealed that she is in a same-sex relationship with a girl from her hometown of Chaka Gopalpur in Odisha. Dutee Chand, however, did not reveal the identity of her partner as she did not want make her "the centre of undue attention". "I have found someone who is my soulmate. I believe everyone should have the freedom to be with whoever they decide they want to be with. I have always supported the rights of those who want to be in a same-sex relationship. It is an individual person's choice," Dutee told The Indian Express.

Interestingly, Dutee Chand is the first Indian sportsperson who has publicly admitted to being in a same-sex relationship.

"She is from my town and a sports fan herself. She read about the struggles that I have gone through to make a career in sports and told me that she was inspired by my story. That is how we came in touch with each other," she added.

Dutee Chand says while her parents have not yet raised any objection to her relationship, her eldest sister has threatened to not only expel her from the family but also send her to jail. "My eldest sister kind of wields power and authority in my family. She has thrown out my elder brother from home because she does not like his wife. She has threatened me that same will happen to me. But I am also an adult who has individual freedom. So, I decided to go ahead with this and make it public.

"My eldest sister feels that my partner is interested in my property. She has told me that she will send me to jail for having this relationship," she said. Dutee said her partner is free to marry whoever she wants to if she decides to do so in future.

"I will continue my athletics career. I am going to take part in the World University Games next month and hope to qualify for the World Championships later this year. My aim to qualify for next year's Olympics, so I am training hard," she said.

While Dutee refused to name her partner, she said the Supreme Court judgement on the issue gave her the courage to go public. "My partner also agreed that we should make this public and face whatever repercussions it may bring to us. I believe in individual freedom and right to decide how and with whom I will live my life."

"I am having a relationship with a 19-year-old woman from my village for the past five years. She is studying B.A. 2nd year in a Bhubaneswar college. She is a relative of mine and whenever I come to home, I spend time with her. She is a kind of soul-mate for me and I want to settle down with her in future," Dutee Chand told PTI.

Dutee Chand, who holds the 100 metres national record, said that she gained the courage to speak out about this after the Supreme Court's historic decision to decriminalise Section 377 which prohibited same sex relationships.

"The Supreme Court of India has also struck down the old law. I believe nobody has the right to judge me as an athlete because of my decision to be with who I want. It is a personal decision, which should be respected. I will continue to strive to win medals for India at international meets," she said.

On the work front, Dutee Chand is currently training in Hyderabad to qualify for the World Championships and the Tokyo Olympics that will be held in 2020.