Manu Bhaker finished at the 10th spot with 573 points in the relay 1 while Heena Sidhu was placed 14th with 571. 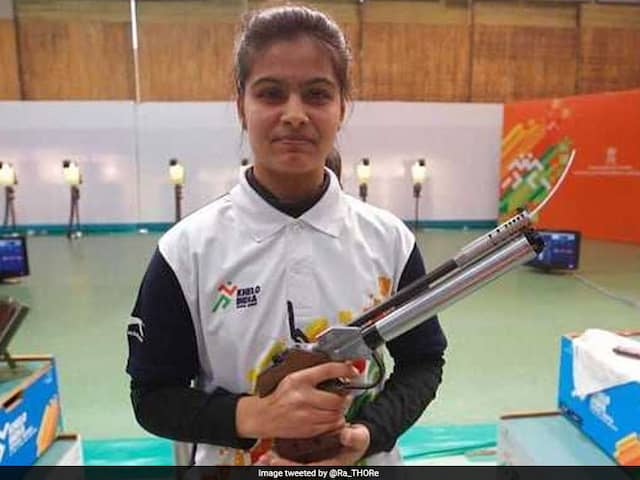 Manu Bhaker finished at the 10th spot with 573 points.© Twitter

Indian shooter Anish Bhanwala finished a disappointing fifth in the men's 25-metre rapid fire pistol category at the ISSF World Cup, in New Delhi on Tuesday. The 16-year-old had registered a career-best and national record score of 588 to qualify for the final. In the six-man final, Bhanwala had a steady start before losing his way. Anish was fourth after three hits each in the opening two series. He had a perfect five in the next series that propelled him to third. Olympic Champion Christian Reitz of Germany won the title.

The deafening applause perhaps got to him as he could only manage one hit in the next series to go down to the bottom two. But he survived by beating Christian Bessaguet of France in the elimination shoot-off.

The Frenchman hit three shots on target and Anish four. Battling for survival, the teenager had another poor show in the next series as he could only hit the target twice.

Reitz showed the Delhi crowd why he is regarded so highly in the world of shooting, missing just five targets out of a possible 40 in the final to put it across the reigning world champion and world number one Lin Junmin of China 35-31.

Former world champion Kim Junhong of South Korea took the bronze medal with a score of 22.

Earlier, star Indian shooters Manu Bhaker and Heena Sidhu failed to qualify for the women's 10-metre air pistol final. Manu finished at the 10th spot with 573 points in the relay 1 while Heena was placed 14th with 571.

China won a maximum of five of the 14 Tokyo 2020 Olympic quota places available at the year's first ISSF World Cup, as Hungary lead the medal tally with three gold medals.

Besides Reitz and Veronica in the Women's 10m Air Pistol, World number six Nina Christen of Switzerland was the other winner on the day, topping the Women's 50m Rifle 3 Positions event and taking home a Tokyo Olympics quota for her nation.

In the women's 10m Air Pistol, Veronica, who won gold in the Women's 25m Pistol a day earlier, did an encore, beating Wu Chai Ying of Chinese Taipei, who got Silver. Veronica shot 245.1 in the final, while Wu shot 238.4. South Korea's Kim Bomi took bronze with a score of 218.3.

Nina Christen of Switzerland shot 457.1 in the Women's 50m Rifle 3 Positions final to win gold. The silver medal and the second quota place in the event went to Shi Mengyao of China who shot 456.6 while Kazakhstan's Korol Yelizaveta picked up the bronze with a score of 445.7