Pictures have emerged of a window of Bangladesh's dressing room completely shattered. 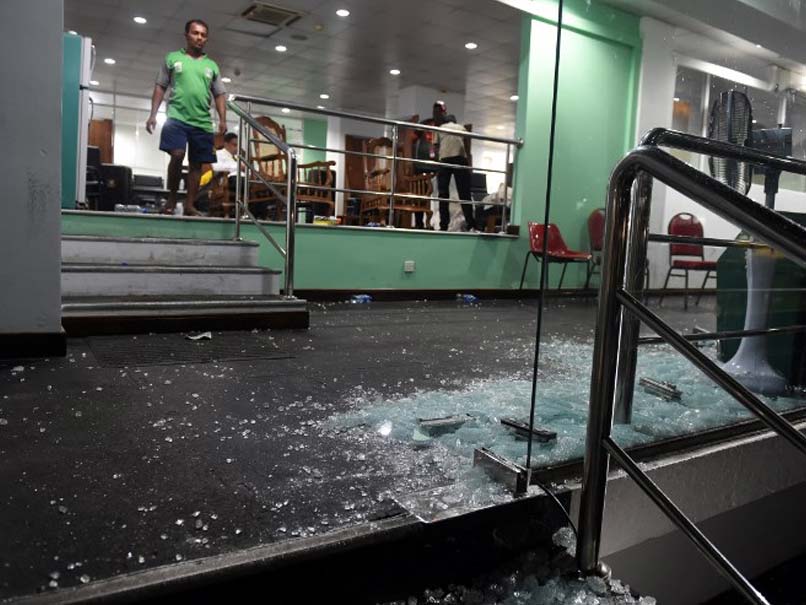 The Bangladesh dressing room was damaged after their win over Sri Lanka.© AFP

The controversy surrounding Bangladesh's poor behaviour on the field during the Nidahas Trophy Twenty20 International match against Sri Lanka deepened as pictures emerged of the Bangladesh dressing room glass smashed into smithereens. Reports suggest the glass was allegedly broken by the Bangladesh players after their narrow win over the hosts at the R. Premadasa stadium in Colombo on Friday night. The match descended into chaos as tempered flared due to some umpiring decisions. Drama unfolded when Mustafizur Rahman missed two bouncers from Isuru Udana in the final over and was run out but the Bangladesh players contested the call, saying it was a no-ball due to its height.

Bangladesh captain Shakib Al Hasan was seen speaking animatedly to an off-field umpire and even waved to call the batsmen back to the pavilion. However, better sense prevailed as the match continued with Bangladesh going on to register a thrilling win.

The win helped Bangladesh book their berth in the Nidahas Trophy final where they will face India on Sunday.

Bangladesh's chase was marred by ugly scenes in the final over. Both sets of players were seen in heated exchanges even after the match with Sri Lankan batsman Kusal Mendis having to be calmed down by Bangladesh opener Tamim Iqbal.

It seemed that the fracas was restricted to the field, however, pictures have shown that a lot more happened away from the public eye.

According ESPNCricinfo, match Referee Chris Broad has seen the footage and spoken to some of the catering staff who have named the player they believe to be responsible.

The report also said that Bangladesh's team management offered to pay for the damages done to the dressing room.

After the match, Shakib tried to play down the entire incident.

"I wasn't calling them back. I was telling them to play. You can describe it both ways. It depends on how you see it," Shakib told reporters.

"We are all humans and making mistakes is in our nature. We should take it on our chin and move forward.

"We always had healthy competition in the ground, but outside, we are friends. Emotions take over, I need to be careful as a leader of a team, I will be careful next time."

Comments
Topics mentioned in this article
Bangladesh Cricket Team Sri Lanka Cricket Team Nidahas T20 Tri-Series Cricket
Get the latest updates on India vs South Africa and check out  Schedule, Results and Live Score. Like us on Facebook or follow us on Twitter for more sports updates. You can also download the NDTV Cricket app for Android or iOS.