India vs New Zealand: Tim Southee dismissed Hardik Pandya, Deepak Hooda and Washington Sundar on consecutive deliveries in the 20th over of the Indian innings. 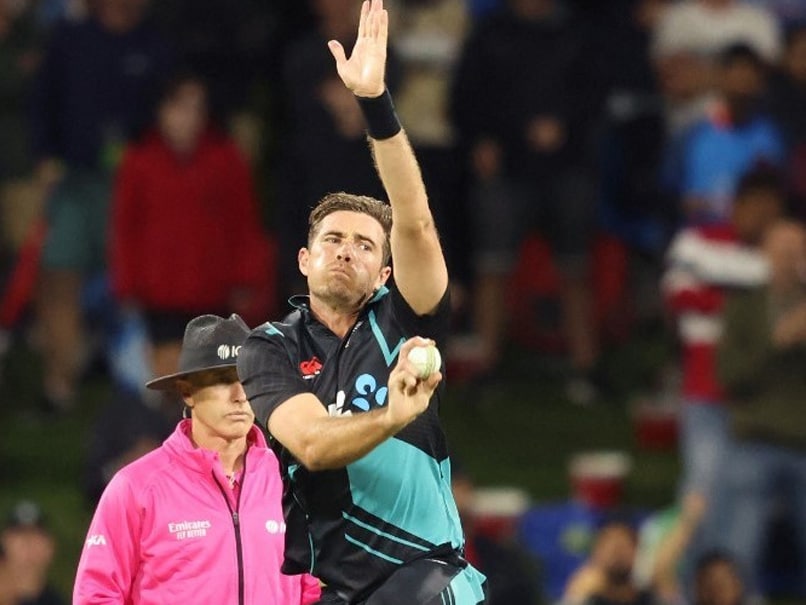 Tim Southee returned figures of 3 for 34 in the second T20I vs India on Sunday.© AFP

New Zealand pacer Tim Southee claimed a hat-trick against India in the second T20I between the two sides at the Bay Oval in Mount Maunganui on Sunday. The right-arm speedster dismissed Hardik Pandya, Deepak Hooda and Washington Sundar on consecutive deliveries in the 20th over of the Indian innings. Hardik was dismissed after he hit the ball into the hands of long-off fielder, while Hooda handed a catch to the fielder at short fine-leg to depart for a golden duck. Sundar too was caught out for a first-ball duck at long-on.

Southee's superb bowling in the last over turned set batter Suryakumar Yadav into a mere spectator as the latter did not get to face a single delivery in it.

However, Suryakumar stole the show at the Bay Oval with his 111 not out off 51 balls. The side was initially struggling to get going in the game after being invited to bat first by New Zealand skipper Kane Williamson, but once Suryakumar took the charge, he kept India in the driver's seat till the end of the innings. He hit 11 fours and 7 sixes to steer India to India 191 for 6 in 20 overs.

Talking about the game, India defeated New Zealand by 65 runs to lead the three-match series 1-0. Deepak Hooda returned figures of 4 for 10, while Yuzvendra Chahal and Mohammed Siraj claimed two wickets each as India bundled out New Zealand for 126 runs.

The third and final T20I between the sides will be played at McLean Park, Napier on November 22.