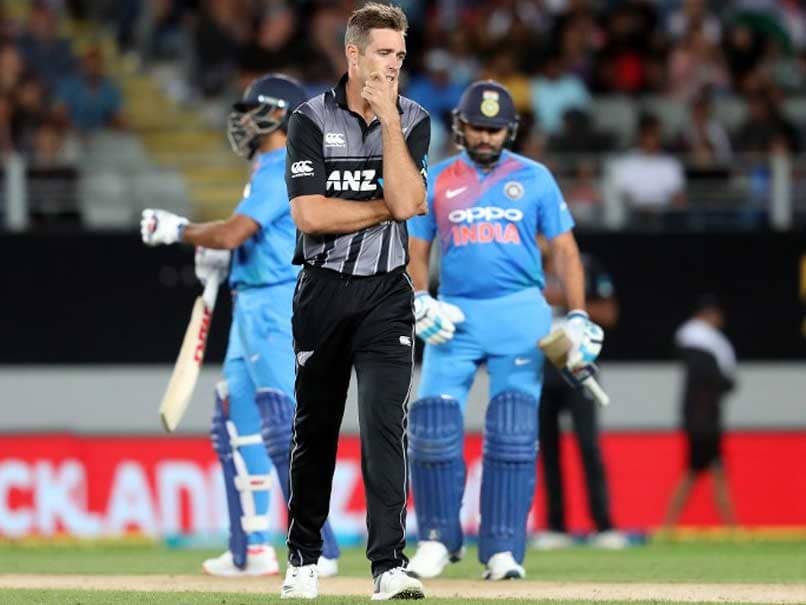 The series is now tied 1-1 with the decider in Hamilton on Sunday.© AFP

Rohit Sharma, after becoming the leading run-scorer in the T20 International cricket, led India from the front as they defeated New Zealand by seven wickets in the second T20I at Eden Park to level the three-match series 1-1 on Friday. Rishabh Pant was unbeaten on 40 with MS Dhoni not out on 20 as India chased down the 159-run target with seven balls to spare. Earlier, Colin de Grandhomme top-scored for New Zealand with 50 runs as New Zealand managed to score 158 for eight in their allotted 20 overs after opting to bat. Dhoni watched from the 22 yards distance as his heir apparent Pant showed spunk in a tricky situation, guiding India to a comfortable win.

The chase was set up by skipper Rohit Sharma (50 off 29 balls) in company of Shikhar Dhawan (30, 31 balls) with a 79-run stand. With whirlwind fifty, Rohit also became the top run-getter in the format, surpassing Martin Guptill.

Dhoni, the original master finisher couldn't have been happier as he saw Pant control what could have been a tricky 159-run chase chase with an unbeaten 40 off 28 balls.

The series is now tied 1-1 with the decider in Hamilton on Sunday.

With the former India captain (20 no off 17 balls) playing the role of a mentor at the other end, the 44-run stand was very significant as Indian cricket slowly moves towards a change of guard in coming days.

Pant's one-handed six off Tim Southee on the bowler's back drive off Scott Kuggeleijn to finish off the match were reminiscent of Dhoni's best days. He hit four boundaries and a six in all.

The flicked six off Kuggeleijn over backward square leg was treat for the eyes but their dismissal along with Vijay Shankar's did create a bit of unrest but Pant ensured that they didn't press the panic button.

The innings would certainly help him make a strong case for being included in the World Cup squad.

The parsimonious Krunal (3/28 in 4 overs) dismissed Colin Munro (12) and skipper Kane Williamson (20) to peg the Black Caps back early in the innings.

In between, Krunal also got the controversial wicket of Daryl Mitchell (1), who fell pray to an umpiring howler, when 'Hotspot' showed a clear inside edge onto the pads.

However, Colin de Grandhomme, who has played for KKR in the IPL, then counter-attacked, scoring a blistering 50 off 28 balls, adding 77 runs with Ross Taylor (42 off 36 balls) for the fifth wicket.

Rohit Sharma New Zealand vs India Cricket New Zealand vs India, 2nd T20I
Get the latest updates on IPL 2020, check out the IPL Schedule for 2020 and Indian Premier League (IPL) Cricket live score . Like us on Facebook or follow us on Twitter for more sports updates. You can also download the NDTV Cricket app for Android or iOS.