IPL 2021: After getting out against Chennai Super Kings, a devastated Andre Russell sat on the stairs in the stadium for the rest of the match. 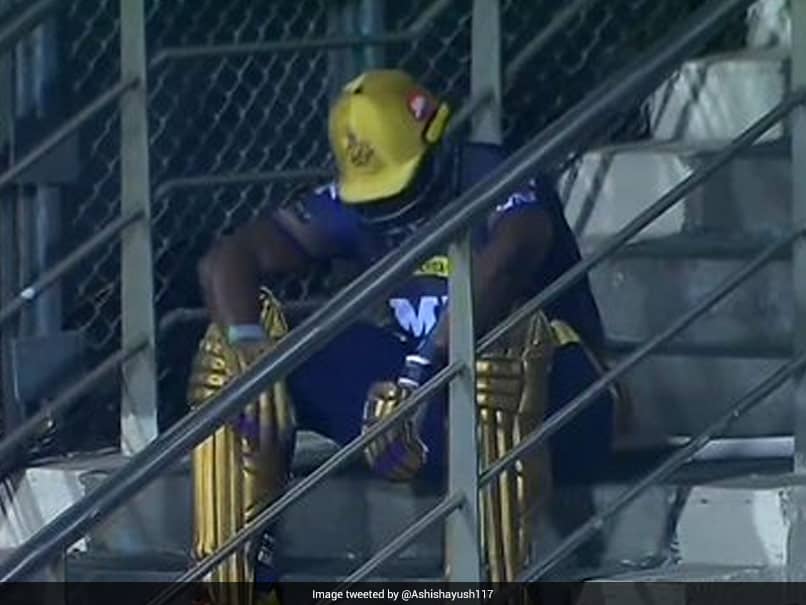 IPL 2021: Andre Russell sat on the stadium stairs after getting cleaned up by Sam Curran.© Twitter

Andre Russell fired back to form in Kolkata Knight Riders' last match in Indian Premier League (2021), blitzing a 22-ball 54 even as his team went down against Chennai Super Kings (CSK). Russell was at his deadliest best as he pummelled the CSK bowlers all over the park. However, a meek dismissal ended his knock, and instead of returning to the dressing room, he sat on the stairs in the stadium for the rest of the match, even as Pat Cummins almost took the team home.

Russell let a delivery from Sam Curran go, thinking it was going down leg, but the ball went on to hit his stumps.

"Well, I was very emotional and I didn't know how to go to the changing room and face all my teammates after leaving a ball and getting out bowled like that," Russell told the KKR website, responding to some tweets from supporters.

"You know, the job is not complete, and I wanted to take the team over the line. So I think the emotions got the best of me but staying strong," he said.

In a post-match interview, KKR captain Eoin Morgan had said, "I tend to stay away from Andre Russell after he gets out."

Responding to that, the all-rounder said "Well, when you get out, and you know the job is not done, you tend to be angry and the Hulk can come out. Last night was different. I was very emotional and disappointed. I wanted to take it home so badly. I was heartbroken."

Chasing 221, KKR lost a flurry of early wickets, but a lower order resistance sparked hime. In the end, they fell just 18 runs short, even after good knocks from Russell, Cummins and Dinesh Karthik.