SRH vs PBKS: Jagadeesha Suchith came in as a substitute fielder for SunRisers Hyderabad but left a mark on the game with his one-handed stunner to send back Punjab Kings' Deepak Hooda. 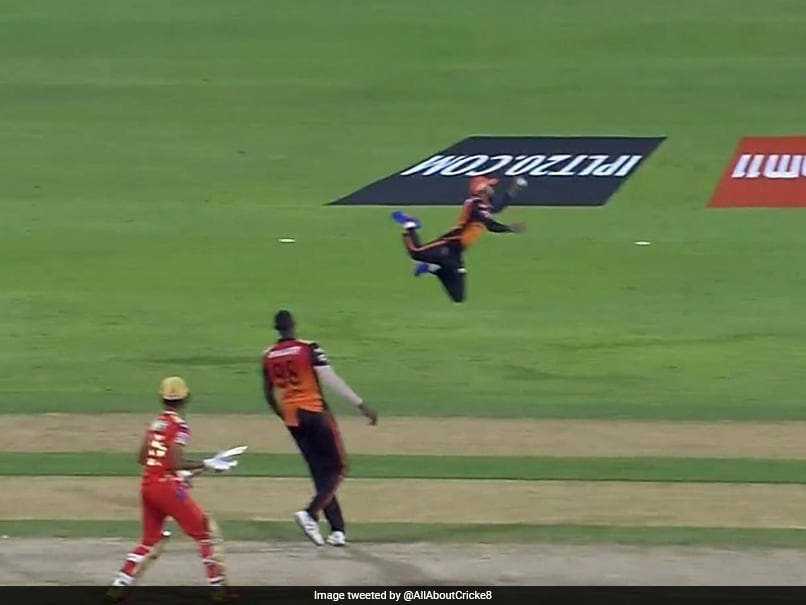 SRH's Jagadeesha Suchith pulled off a stunning one-handed catch during their clash vs PBKS.© Twitter

SunRisers Hyderabad (SRH) season went from bad to worse as they failed to chase down 126 runs against Punjab Kings (PBKS) on Saturday, registering their eighth loss in the ongoing Indian Premier League (IPL) 2021. While nothing seems to be going SRH's way, Jagadeesha Suchith, who came in as a substitute fielder for Hyderabad, grabbed eyeballs with a stunning one-handed grab to dismiss Deepak Hooda. The PBKS all-rounder was looking to go over covers but Suchith dived to his left and pulled off a sensational catch.

He leaps towards his left and grabs a sensational one-handed catch. #VIVOIPL #SRHvPBKS @SunRisers

"Super Suchith takes a stunner. He leaps towards his left and grabs a sensational one-handed catch. Thumbs up Thumbs up #VIVOIPL #SRHvPBKS @SunRisers," the tweet read.

In the match, after opting to bowl, SRH bowlers fired in unison and managed to keep a star-studded PBKS batting line-up down to a total of 125 for seven from their allotted 20 overs.

Aiden Markram top-scored for Punjab with a knock of 27. For SRH, Jason Holder was the pick of the bowlers, finishing with figures of three for 19 from his four-over spell.

Chasing 126 for their second win of the season, SRH got off to a poor start as they lost David Warner in the first over. Mohammed Shami delivered the early blow and the Indian pacer soon castled SRH's skipper Kane Williamson to further push Hyderabad on the backfoot.

Ravi Bishnoi was the wrecker-in-chief in the middle overs as he picked up three wickets. Holder tried to take his team over the line but even his unbeaten knock of 47 was not enough as SRH eventually fell five runs short.

Punjab Kings Jagadeesha Suchith IPL 2021 Sunrisers Hyderabad vs Punjab Kings, Match 37 Cricket
Get the latest updates on IPL 2021, check out the IPL 2021 Schedule and Indian Premier League Live Score . Like us on Facebook or follow us on Twitter for more sports updates. You can also download the NDTV Cricket app for Android or iOS.