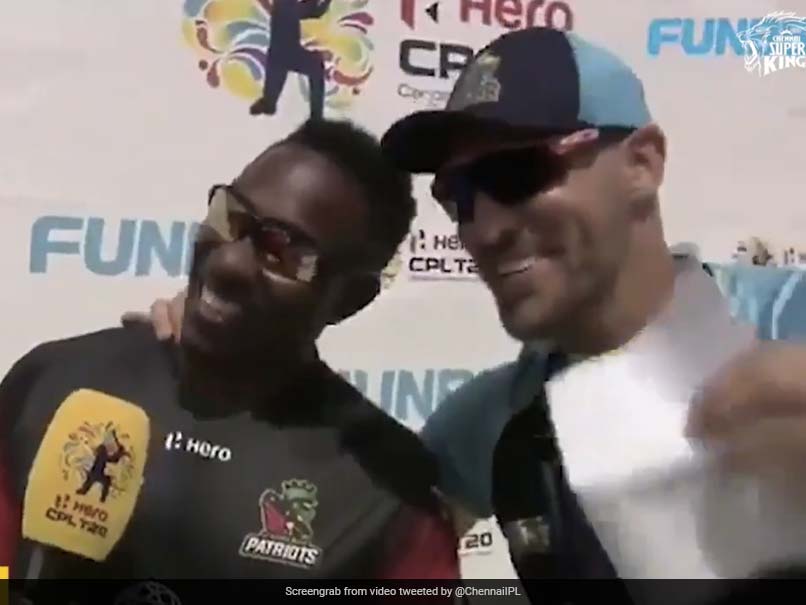 Remember when Dwayne Bravo and Faf du Plessis crooned the Chennai Super Kings theme song during a Caribbean Premier League match? Let's do a quick recap. This happened just after the toss between St Lucia Kings and St Kitts & Nevis Patriots. Bravo's Patriots won the toss and when the match official asked him about his strategy for the game, the West Indies all-rounder and Du Plessis did the unexpected. If you are already feeling nostalgic, then we suggest you head straight to CSK's Twitter timeline. The Chennai-based Indian Premier League (IPL) outfit has uploaded a video in which Bravo and Du Plessis have shared the story behind their impromptu act.

Du Plessis said, “When we went to the toss, the person who was conducting it was saying ‘two CSK boys'.

"I was like, how about we sing out the team song, ‘We are the Chennai boys'. He (Faf) said let's go for it. And so we decided, depending on whoever wins the toss, will start it and the next one will join," Bravo shared his take.

Then, Du Plessis went on to add, “We are proud of being part of CSK and that's it."

He said that whatever happens, the bond between Chennai players will always remain strong.

Fans loved their version of "We are Chennai boys and making all the noise wherever we go".

Along with the clip, CSK wrote, "It's Yellove first." The clip was an instant hit on the social media platform and has garnered more than 30,000 views so far.

A user shared an old quote by Faf du Plessis to share his excitement.

Another wanted Du Plessis to hit a fifty in today's match against SunRisers Hyderabad.

"Would like to see him hit a fifty tonight, he has missed out on a few now,” read the post.

Would like to see him hit a fifty tonight, he has missed out on a few now!

His dedication to the game and the team in unmatched. Faf always give his best in every match, looking forward to seeing him flying around on the field.

“Wow. It was such a sweet mention when we saw the video earlier during CPL20,” was one of the reactions.

Wow!! It was such a sweet mention when we saw the video earlier during CPL20. It got even sweeter now hearing about this from Bravo & Faf. They never shy away showing their love and bond for CSK

A person sent “lots of love” to Dwayne Bravo and Faf du Plessis.

This is
Lots of #Yellove to you guys

Faf du Plessis IPL 2021 Cricket
Get the latest updates on IND vs NZ 2021, check out the Schedule and Live Score . Like us on Facebook or follow us on Twitter for more sports updates. You can also download the NDTV Cricket app for Android or iOS.