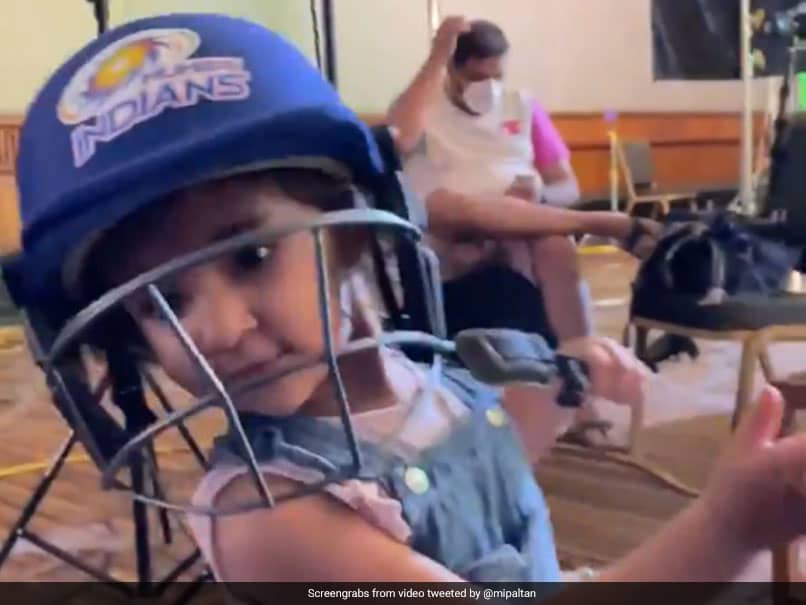 Rohit Sharma is gearing up for the upcoming season of the Indian Premier League (IPL) as he is eyeing to become the first captain in the franchise-based tournament to win three back-to-back titles. Apart from a huge fan base of Mumbai Indians, Rohit also has his family to cheer him up in challenging bio-bubble life. On Wednesday, Mumbai Indians took to social media to share an adorable video of Rohit's daughter Samaira mimicing her dad's pull-shot and cheering for the defending IPL champions.

In the video, Samaira can be seen wearing a helmet and then playing a mini pull-shot when Ritika (Rohit's wife) asks her how dad hits a six.

Rohit didn't get a big score under his belt in the ODIs but helped India get off to a good start by seeing off the new ball.

While Rohit failed to score big in the limited-overs format, he was India's top-scorer in the Test series against England.

Rohit smashed a century and a half-century in testing conditions against a potent England bowling attack.

Last season, Rohit missed out a few games due to an injury but he clicked when it mattered the most -- the final.

Rohit Sharma IPL 2021 Cricket
Get the latest updates on IPL 2021, IPL Points Table , IPL Schedule 2021 , live score . Like us on Facebook or follow us on Twitter for more sports updates. You can also download the NDTV Cricket app for Android or iOS.