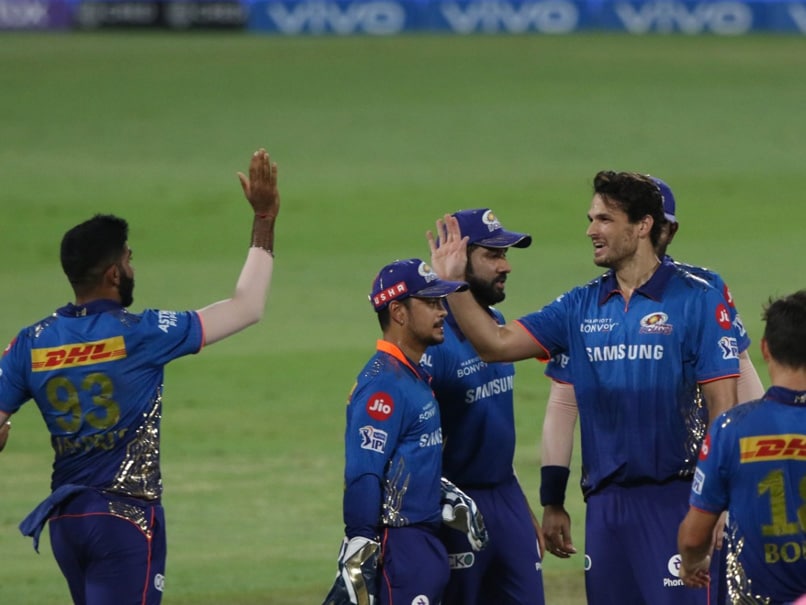 Mumbai Indians defeated Rajasthan Royals by eight wicketsin match 51 of the Indian Premier League (IPL) in Sharjah to keep their playoffs hopes alive on Tuesday. With this win, Mumbai Indians (MI) moved up to 5th spot in IPL 2021 points table. The Rohit Sharma-led side is now tied on points with Kolkata Knight Riders who currently occupy the fourth spot on the IPL points table. While the defending champions got the result they wanted, Rajasthan Royals are all but out of reckoning for a place in the playoffs of IPL 2021.

Bowlers setup the win by restricting Rajasthan Royals for a paltry total of 90 for 9 and then Ishan Kishan blasted a 25-ball half-century to win the game for his side with over 11 overs to spare.

Mumbai Indians, after a thumping win over Rajasthan Royals, jumped two places on the points table to take the 5th spot. They are tied on points with KKR but Kolkata are ahead thanks to their superior net run-rate.

Delhi Capitals lead the IPL points table with 20 points from 13 games while Chennai Super Kings are second with 18 points.

Royal Challengers Bangalore are third on the list with 16 points but they still have two games left.

Punjab Kings are sixth on the points table with 10 points from 13 matches, followed by SunRisers Hyderabad who have won just two games this season.

Punjab Kings skipper KL Rahul is leading the race for Orange Cap with  528 runs in 12 games in IPL 2021.

Behind him is Ruturaj Gaikwad who has scored 522 runs from 13 matches, including a century against RR.

Sanju Samson failed with the bat against MI in Sharjah on Tuesday and he is fourth on the list of leading run-scorers this season.

Harshal Patel is the leading wicket-taker this season with 26 wickets in 12 matches. Delhi Capitals' Avesh Khan is behind him with 22 wickets in 13 games.

Jasprit Bumrah picked up two wickets against Rajasthan Royals on Tuesday to take his tally to 19 wickets in this year's IPL.

Mohammed Shami is behind him with 18 wickets in 13 matches.

Rajasthan Royals IPL 2021 Cricket
Get the latest updates on Fifa Worldcup 2022 and check out  Fifa World Cup Schedule, Stats and Live Cricket Score. Like us on Facebook or follow us on Twitter for more sports updates. You can also download the NDTV Cricket app for Android or iOS.