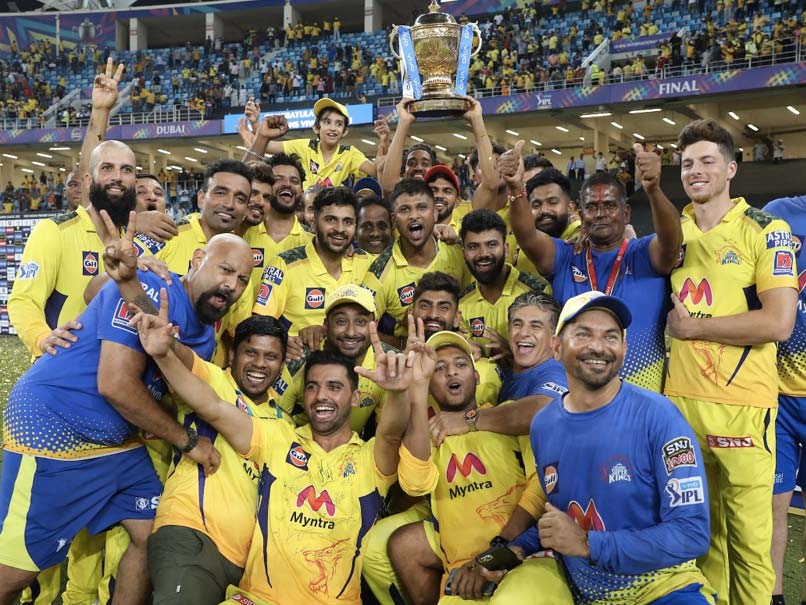 IPL 2021 Final: CSK players celebrating with the IPL trophy after win vs KKR in Dubai.© BCCI/IPL

Chennai Super Kings (CSK) secured their fourth Indian Premier League (IPL) title in style as they clinched a 27-run win against Kolkata Knight Riders (KKR) in the IPL 2021 final in Dubai on Friday. The Board of Control for Cricket in India (BCCI) president Sourav Ganguly along with Board secretary Jay Shah handed over the trophy to CSK skipper MS Dhoni as the triumphant players began their celebrations. Dhoni soon handed over the trophy to his CSK teammates as the entire contingent erupted in jubliation. The players were also joined by their children in the trophy celebration.

This was the fourth occasion that Dhoni picked up the IPL trophy and with the final win, CSK stand second to only Mumbai Indians (MI) in the list of most IPLs won.

Throughout the game, CSK looked in total control after being asked to bat first at the Dubai International Stadium. Openers Faf fu Plessis and Ruturaj Gaikwad gave CSK a perfect platform to build upon as both in-form players took matters in their hands in the initial overs.

CSK went along smoothly, posting a challenging 192/3 in 20 overs.

The only worrying time for CSK skipper Dhoni happened during a solid opening partnership between KKR opening batters Venkatesh Iyer and Shubman Gill.

However, despite having wickets at their disposal, KKR failed to go full throttle in the middle and final overs as CSK bowlers jammed the run scoring with some intelligent bowling.

KKR batters could only muster 165/9 in reply, as they lost their first IPL final in three appearances.

Faf du Plessis Shubman Gill Venkatesh Iyer IPL 2021 Cricket Chennai Super Kings vs Kolkata Knight Riders, Final
Get the latest updates on ICC T20 Worldcup 2022 and CWG 2022 check out the Schedule, Live Score and Medals Tally. Like us on Facebook or follow us on Twitter for more sports updates. You can also download the NDTV Cricket app for Android or iOS.