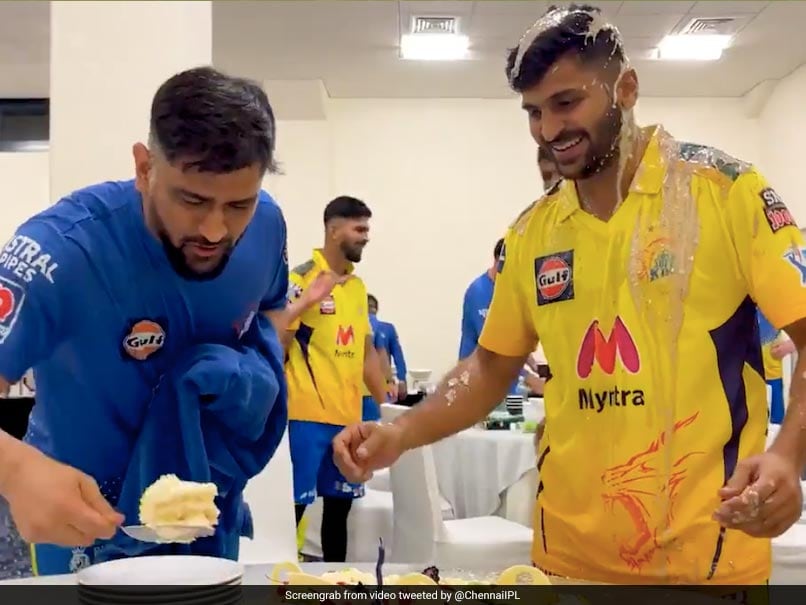 Chennai Super Kings (CSK) players celebrated all-rounder Shardul Thakur's birthday in grand fashion after winning their fourth Indian Premier League (IPL) title on Friday, beating Kolkata Knight Riders (KKR) by 27 runs in the final in Dubai. The CSK social media handles posted a video of players serenading Shardul with birthday songs as the all-rounder cut his birthday cake. CSK skipper MS Dhoni helped Shardul with the cake-cutting formalities while the other squad members poured drinks on him and smeared his face with cake.

These celebrations came soon after CSK won against KKR to register yet another IPL title triumph under their belt. In reply to CSK's 192 runs on the board after batting first, the Eoin Morgan-led side was restricted to only 165 runs.

Shardul earlier enjoyed a brilliant outing with the ball as he emerged as the pick of the bowlers for CSK. His figures read three wickets for 38 runs in his four overs.

Although Shardul failed to make a mark with the bat in IPL 2021, he ended up with 21 wickets in 16 matches for CSK.

After some fine all-round performances in India colours in Australia and then in England, Shardul was rewarded with an Indian call-up for the upcoming T20 World Cup in the UAE and Oman.

The all-rounder was recently confirmed as Axar Patel's replacement in the Team India squad by the Board of Control for Cricket in India (BCCI).

Eoin Morgan IPL 2021 Cricket Chennai Super Kings vs Kolkata Knight Riders, Final
Get the latest updates on ICC T20 Worldcup 2022, check out the Schedule and Live Score. Like us on Facebook or follow us on Twitter for more sports updates. You can also download the NDTV Cricket app for Android or iOS.