IPL 2021: Delhi Capitals' pacer Umesh Yadav pulled off a brilliant catch of his own bowling during his team's practice match. 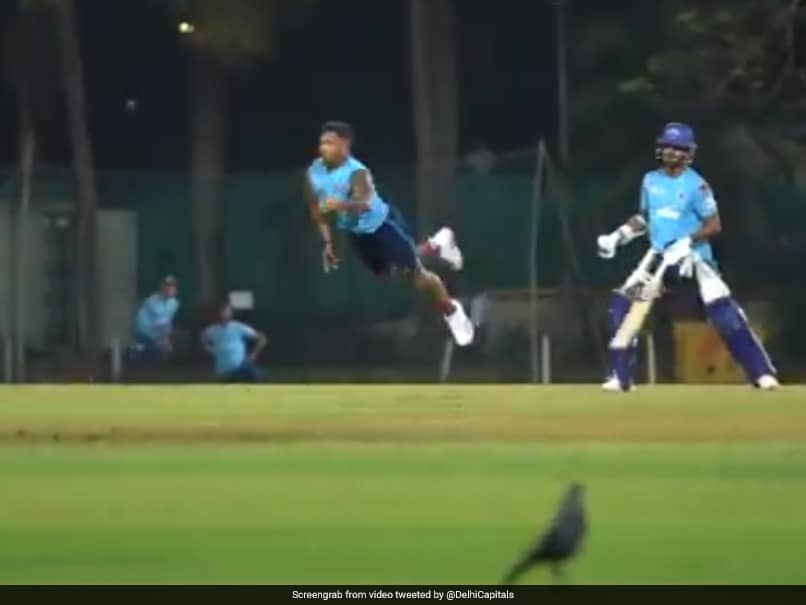 Umesh Yadav went airborne to complete a brilliant catch of his own bowling.© Twitter

It appears that all the effort Delhi Capitals' pacer Umesh Yadav put into improving his fitness is bearing fruit now. During a practice match ahead of their next Indian Premier League (IPL) game, the right-arm pacer showed incredible flexibility and reflexes as he lunged into his follow-through to take a return catch off Ajinkya Rahane with his wrong hand. A video tweeted by the Delhi Capitals (DC) showed the one-hand stunner, with Umesh halfway into the air. DC tagged the video #YehHaiNayiDilli. The pacer had suffered a calf injury during India's recent tour of Australia. Later, during the home series against England, Umesh returned to the squad for the final two Tests.

In a recent video on Instagram, Umesh showed how he has readied himself for the big battles ahead. He is seen doing intensive weight and cardio training.

"Same mindset, same ambitions," he had captioned the photograph.

DC had recently uploaded another clip of the 33-year-old in which he bowled and also wielded the bat to hit the ball around the ground.

“Wondered what a complete training routine of your favourite DC star looks like? Here's Umesh Yadav taking you through his,” read the caption.

Wondered what a complete training routine of your favourite DC star looks like?
Here's @y_umesh taking you through his#YehHaiNayiDilli #DCOnThePitch @OctaFX pic.twitter.com/MzOhAvRjK1

Delhi Capitals play their next match against Rajasthan Royals (RR) on April 15 at the Wankhede Stadium in Mumbai.

Umesh Yadav IPL 2021 Cricket
Get the latest updates on IPL 2021, IPL Points Table , IPL Schedule 2021 , live score . Like us on Facebook or follow us on Twitter for more sports updates. You can also download the NDTV Cricket app for Android or iOS.