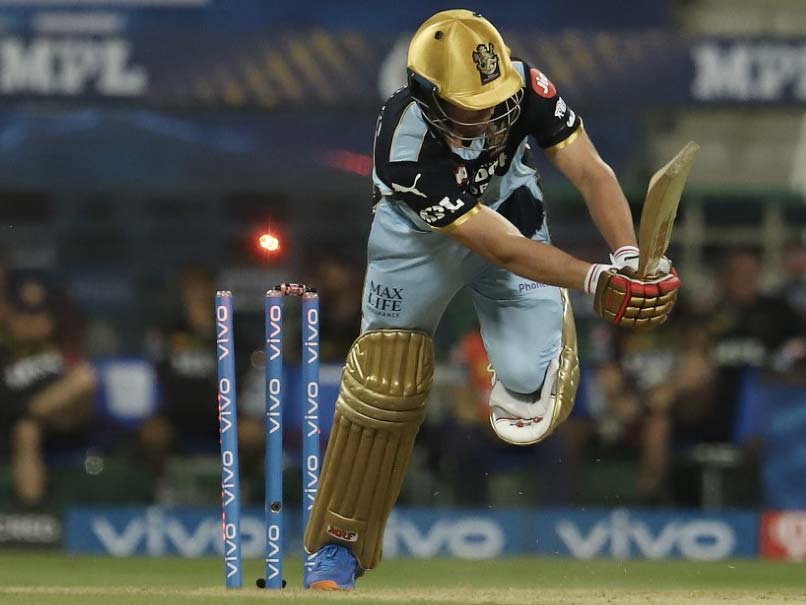 AB de Villiers was dismissed for a first-ball duck by Andre Russell.© BCCI/IPL

Kolkata Knight Riders' Andre Russell bowled an accurate yorker to send Royal Challengers Bangalore's star batsman AB de Villiers back to the pavilion for a golden duck during match number 31 of the Indian Premier League (IPL) 2021 on Monday. De Villiers had just come out to bat after the dismissal of KS Bharat. Russell straightaway went full and straight to him and beat the defence of De Villiers. After getting the big wicket of De Villiers, Russell celebrated by punching the air in joy.

Earlier in the match, Virat Kohli had won the toss and opted to bat at the Sheikh Zayed stadium in Abu Dhabi.

Kohli's decision backfired as KKR bowlers kept chipping away with wickets at regular interval. Seamer Prasidh Krishna dealt RCB a big blow when he had Virat Kohli trapped in front of wicket with his fourth delivery that jagged in and hit him above the knee-roll.

Having completed a double century of matches for RCB, Kohli went for a review but the ball-tracking technology confirmed that it was going on to hit the stumps. This was immediately after Kohli sent a Krishna delivery in front of square on the off-side for a lovely four.

RCB then lost Devdutt Padikkal on the final ball of the sixth over. The Bangalore-based franchise then lost KS Bharat and AB de Villiers in the same over.

A few overs later, Glenn Maxwell and debutant Wanindu Hasaranga were both dismissed by Varun Chakravarthy.

RCB were eventually bowled out for a paltry total of 92.

Andre Russell Cricket IPL 2021
Get the latest updates on India vs South Africa and check out  Schedule, Results and Live Score. Like us on Facebook or follow us on Twitter for more sports updates. You can also download the NDTV Cricket app for Android or iOS.