IPL 2021: With the Indian Premier League 2021 around the corner, the teams have come up with new jersey designs and Ajinkya Rahane went to town with the Delhi Capitals colours. IPL 2021: Ajinkya Rahane is set to play his second season for the Delhi Capitals.© Instagram

The new season of the Indian Premier League (IPL) is less than a month away and players are excited as they get in the groove for the marquee T20 tournament. India's Test vice-captain Ajinkya Rahane on Monday took to Instagram to share a glimpse of Delhi Capitals' jersey for the upcoming IPL season. Rahane shared pictures of the front and back of the jersey on his Instagram story and wrote "Jersey nayi feeling wahi (New jersey, same feeling)," in Hindi. 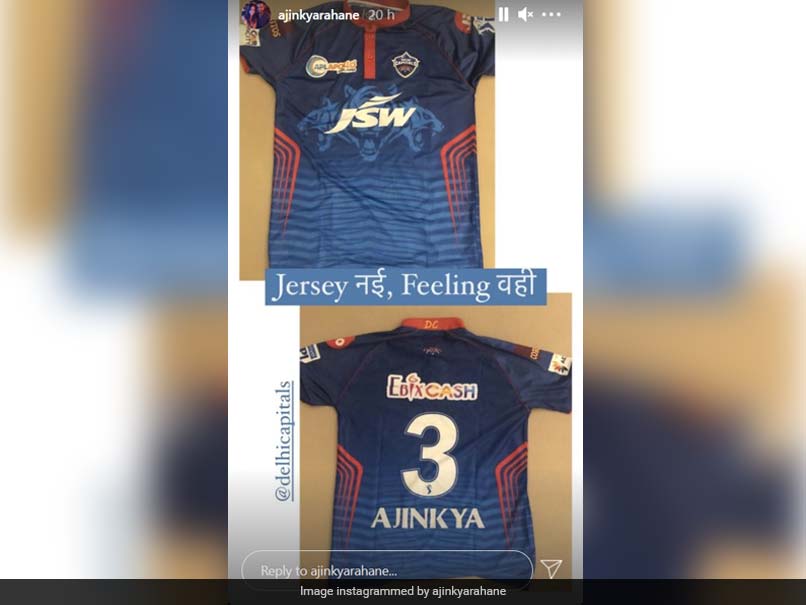 Ajinkya Rahane recently led India to a come-from-behind 2-1 series win in Australia in the absence of regular captain Virat Kohli, scoring a brilliant century in Melbourne in the process.

His last assignment with the national team was the home Test series against England, which India won by a handsome margin of 3-1, but with the two teams moving on to the limited-overs leg of England's tour, Rahane will next be seen in action in IPL 2021.

Rahane joined Delhi Capitals ahead of the previous season. In IPL 2020, he played nine matches and scored one half-century as the team reached the final for the first time ever.

The Capitals roped in eight new players in the auction ahead of the season.

Their most notable buy was Steve Smith, while they also added the likes of Umesh Yadav, Sam Billings and Tom Curran.

Delhi Capitals will begin their season against Chennai Super Kings in Mumbai on April 10.

It will be the second match of the season, with the tournament kicking off on April 9 with defending champions Mumbai Indians taking on Royal Challengers Bangalore in Chennai.