IPL 2020, DC vs RCB: Delhi Capitals defeated Royal Challengers Bangalore by six wickets on Monday to finish second in the points table with 16 points and qualify for the playoffs. 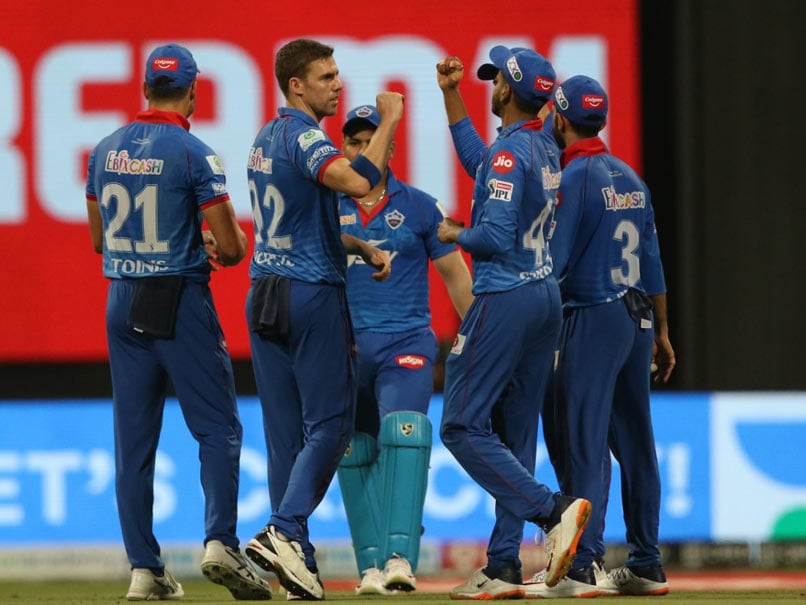 IPL 2020, DC vs RCB: Anrich Nortje was the most successful bowler on the night with 3 wickets.© BCCI/IPL

After a spirited bowling performance, Shikhar Dhawan (54 off 41) and Ajinkya Rahane (60 off 46) scored fifties as Delhi Capitals defeated Royal Challengers Bangalore by six wickets at the Sheikh Zayed Stadium, Abu Dhabi on Monday to qualify for the playoffs, finishing second in the points tablewith 16 points. Despite the loss, Virat Kohli's men also made it to the knockout stage, thanks to their superior Net Run-Rate (NRR) than Kolkata Knight Riders who also have 14 points from as many games. Delhi Capitals skipper Shreyas Iyer won the toss and opted to bowl in a must-win game. Their fast bowling duo of Kagiso Rabada and Anrich Nortje bowled brilliantly to restrict RCB to a modest 152/7, which Delhi chased down quite comfortably, with six balls to spare.

Prithvi Shaw's poor run continued as he got out for nine in the second over. However, unlike last few innings where he got out playing careless shots, his dismissal in this match was result of a peach of a delivery from Mohammed Siraj.

Dhawan and Rahane -- two of the most experienced batsmen in Delhi's line-up -- the strung together a 88-run partnership for the second wickets, putting their side in a commanding position.

After three poor outings, Dhawan bounced back strongly smashing his third fifty of the season. Rahane also showed his class as he scored a brilliant fifty to lay a great foundation for the chase. However, he must be disappointed with the manner in which he got out, giving away the opportunity to finish the game for his side.

RCB picked three wickets in close intervals, pushing Delhi's chase beyond 17.3 overs which helped them secure a playoff spot. Rishabh Pant and Marcus Stoinis remained unbeaten as Delhi chased down the total in the penultimate over. Shahbaz Ahmed picked two wickets for 26 runs, while Siraj and Washington Sundar shared two wickets between them.

After a series of poor performances in last few games and given what was at stake in this game, both sides made a couple of changes to their playing XI. Josh Philippe failed to deliver once again as he fell got out cheaply in the fifth over.

Devdutt Padikkal continued his dream run in the IPL 2020, smashing his fifth half-century of the season. He combined with skipper Kohli to put on 57 runs for the second wicket.

Kohli looked in some form as he played his trademark cover drives but couldn't make most of the early promise, getting out to Ravichandran Ashwin for 29.

Padikkal brought up his fifty off just 40 balls but fell soon after trying to slog Nortje's fast delivery. Chris Morris also got out in the same over as Delhi bowlers pulled things back towards the end.

AB de Villiers (35 off 21 balls) and Shivam Dube (17 off 11) scored some started to attack but got out at the wrong time as RCB finished with a below-par total. Nortje and Rabada bowled brilliantly and finished with three and two wickets respectively.

AB de Villiers
Get the latest updates on Fifa Worldcup 2022 and check out  Fifa World Cup Schedule, Stats and Live Cricket Score. Like us on Facebook or follow us on Twitter for more sports updates. You can also download the NDTV Cricket app for Android or iOS.